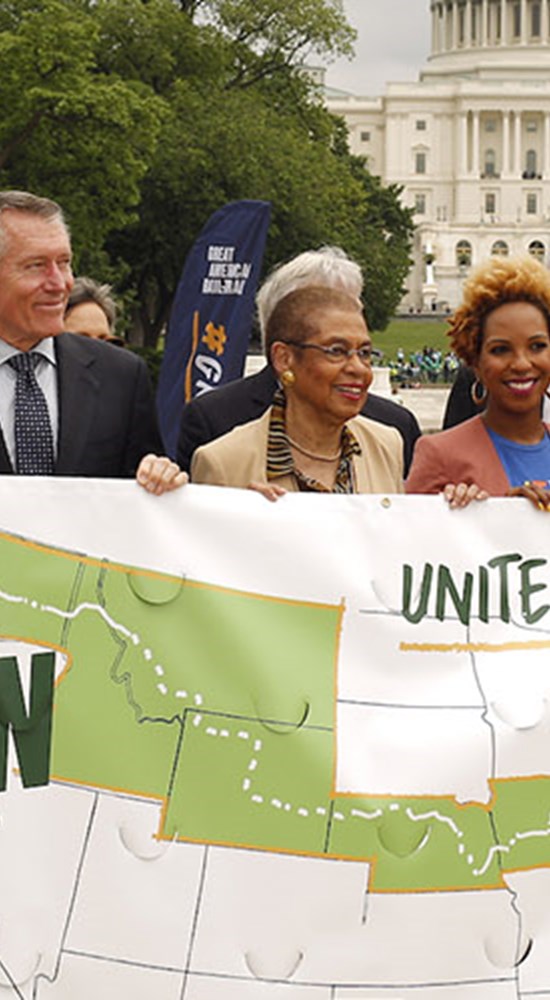 More than 30 years after a team of visionaries formally established Rails-to-Trails Conservancy—a dream some three decades in the making came to fruition when the plan for the cross-country Great American Rail-Trail was introduced to the world on May 8, 2019, the 150th anniversary of the transcontinental railroad. The day was a symbolic moment for the national trail community as RTC stood alongside hundreds of partners and fully committed to completing this multiuse trail that will eventually connect over 3,700+ miles between Washington, D.C., and Washington State.

More than 52% complete to date, the Great American travels through some of the most renown geography, landscapes, and historic and cultural landmarks in America.

From Dream to National Treasure: The Great American Rail-Trail

How We Made This Iconic Project Come Alive in 2019

We engaged with and drew inspiration from hundreds of partners—including trail groups, community leaders, funders and advocates—to solidify a preferred route for the Great American including more than 125 existing trails, and 90+ gaps waiting to be filled, spanning 12 states and Washington, D.C. (The route has since grown to more than 145+ existing trails!)

$7.2 million in Public and Private Funds

We supported advocacy efforts yielding more than $7.2 million in public and private funds for project trails—and helped build vital support from decision-makers and community leaders for the Great American regionally and nationally. In Nebraska, a grant from RTC was leveraged to unlock critical state funds to complete a western segment of the Cowboy Trail, one of the longest rail-trail conversions in the country.

We rallied tens of thousands of supporters—who stepped up to support this national treasure with donations, voices and inspirational engagement in the media and within our national trail community. We’ve been receiving an amazing response from across the country—get a glimpse  our Great American Rail-Trail Facebook page.

“Following the success of our Great American route reveal celebration in May 2019, we launched the #GRTAmerican Experience campaign to encourage people to experience the more than 52% of the route that is already complete, and to help build momentum for the trail on social media.

By sharing their unique experiences in their own personal networks, trail users are serving as ambassadors to help build awareness of the Great American—and amplify national excitement for this iconic route.

Spotlight on a Catalyst Initiative

In August, we headed to the Quad Cities where we joined on-the-ground partners to showcase the transformative impact of the region’s trails, including the Riverfront Trail and Great River Trail, both of which are host trails of the Great American Rail-Trail. Underscored during the event were the vast economic benefits that could be realized by completing other key projects in the route, and the potential of state programs like the Natural Resources and Outdoor Recreation Trust Fund, which could help support a myriad of outdoor initiatives statewide, including trails—for making this possible.

A Landmark for the Ages

Read More About the Cultural Connections of this Iconic Route: 16 Historic Highlights Along the Route of the Great American Rail-Trail

MORE ABOUT THE GREAT AMERICAN RAIL-TRAIL

What Will It Take to Finish This Bike Trail Across the U.S.?