Connecting Lincoln’s Communities and Preserving Its Natural and Cultural Treasures

The evolution and expansion of Lincoln, Nebraska’s trail system over the past few decades has helped to inspire a new culture of walking and biking in the region. The passionate work of local trail advocates, and the advent of trails such as the MoPac Trail East and the more recent Chief Standing Bear Trail have contributed to Lincoln’s reputation as one of Nebraska’s leading trail cities.

The Prairie Corridor on Haines Branch is a tallgrass prairie passage and trail that will build on Lincoln’s nationally recognized trail and greenway system, which includes more than 157 miles of linear parks, trails and greenways along waterways and former rail corridors.

The completed trail will create many new natural and physical connections in Lincoln and Lancaster County as it follows the Haines Branch of Salt Creek from the Pioneers Nature Center to the Conestoga Lake State Recreation Area, and then down through the Village of Denton before ending at the Spring Creek Audubon Center. On the east end, the trail will also connect to the city’s trail network via the Bison Trail, which provides a safe crossing under US 77 and connects to the Salt Creek Levee Trail heading toward the heart of the city.

A 20-mile round-trip route, the Prairie Corridor is a key component of ecotourism for the area, allowing people to immerse themselves in Nebraska’s tallgrass prairie—as well as many other natural and cultural offerings—while making deeper connections to the area and enjoying local services and amenities.

Ultimately, the corridor will enhance Lincoln’s already thriving trail system while supporting economic development and environmental education—and promoting the enhancement and preservation of one of Nebraska’s most valuable resources.

The Lower Platte South National Resources District and the Nebraska Trails Foundation are in the early stages of development for a 10-mile trail project that will fill an existing gap between the MoPac Trail East and the 13-mile MoPac Trail (Springfield) extending southwest from Omaha. If filled, the trail network—which also includes the MoPac Trail West and the Platte River Connection—could create a continuous nonmotorized trail corridor between the two largest cities in Nebraska—opening up new opportunities for active transportation and outdoor tourism. 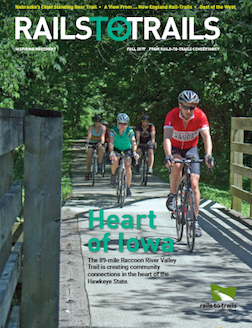 The product of years of advocacy on the part of local trail advocates in Lincoln as well as the Nebraska Trails Foundation, the Chief Standing Bear—owned by the Ponca Tribe of Nebraska and the City of Beatrice, and managed by the Homestead Conservation and Trails Association—memorializes the 1877 Ponca Trail of Tears and pays tribute to the brave man who led his people back to their homeland.

In 2017, Rails-to-Trails Conservancy was pleased to name Ross Greathouse and Lynn Lightner as the year’s Doppelt Family Rail-Trail Champions for their nearly four decades of volunteer work and dedication to developing some of Nebraska’s most treasured pathways.