As Greater Memphis’ walking and biking culture continues to grow, the region has embraced a 25-year plan to connect its communities through a massive trail and green-space network known as the Mid-South Regional Greenprint and Sustainability Plan, or “Greenprint.”

A product of a 2.5-year planning process involving thousands of individuals in four counties and 18 municipalities in Tennessee, Arkansas and Mississippi, Greenprint seeks to connect the region’s parks and green space through approximately 500 miles of greenway trails and 200 miles of bicycle trails that spur recreation, physical activity and alternative transportation—as well as the region’s abundant economic, social and natural opportunities—thereby ushering in a new era of regional sustainability.

Trails such as Memphis’ 11-mile Shelby Farms Greenline—which features one of America’s largest urban parks and receives more than 200,000 visitors annually—and the Big River Crossing, a 1-mile pedestrian bridge connecting the Downtown Memphis Riverfront and West Memphis, Arkansas, already demonstrate the ways in which Memphis trails are improving transportation, health and safety, economic development and environmental quality in the region.

By expanding existing trails and on-road connectors, Greenprint will eventually link 95 percent of the region’s large parks, as well as connect 78 percent of residents and 79 percent of jobs currently within 1 mile of a completed or proposed corridor.

Greenprint envisions a region of connected communities that are united in creating a high quality of life; a region where the physical and social environments are sustainable for future generations; and where all people can access abundant economic, social and natural opportunities.

At nearly a mile in length, Big River Crossing is the longest public pedestrian bridge across the Mississippi River as well as the country’s longest active rail/bicycle/pedestrian bridge. It serves as the connection point of Main Street to Main Street, a 10-mile multimodal corridor that also features the Delta Regional River Park and Big River Trail, creating ties to attractions between Memphis, Tennessee, and West Memphis, Arkansas. 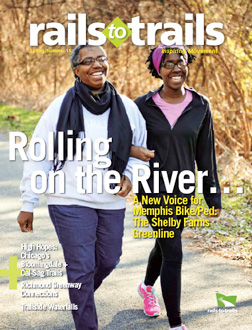 Rolling on the River

In less than a decade, the once-unlikely Shelby Farms Greenline became a defining voice for the burgeoning active-transportation community in Memphis, Tennessee. Opened in the late-2000s when the city had only a few miles of active bike lanes, and initially built with no frills, the trail has become a cultural and recreational phenomenon, extending approximately 11 miles today and welcoming more than 200,000 trail users annually.