Strengthening the Region Through a Dynamic Network of Rivers, Parks and Communities

Over the past two decades, the citizens of St. Louis, Missouri, have been working toward a collective vision of a clean, green and connected region through a dynamic network of 45 greenways known as the “River Ring.” Intended to strengthen the social, economic and environmental well-being of the area and raise the quality of life for people of all ages and abilities—the initiative will eventually encompass a 600-mile (1,216-square-mile) web of trails that links three counties across Missouri and Illinois and serves more than 2 million people.

The Great Rivers Greenway—the public agency leading the River Ring initiative—is actively working with partners on 16 of the 45 greenways, with 117 miles of trails completed and another 200+ miles in various stages of planning. Priority projects such as the Chouteau Greenway will create opportunities for people to explore the region’s natural and cultural resources, leave a legacy for future generations, and ultimately make St. Louis a more vibrant place to live, work and play.

The Chouteau Greenway will provide a critical link between two of the city’s greatest assets: Forest Park and the Jefferson National Expansion Memorial (Gateway Arch). The greenway is envisioned to be a vibrant corridor that serves as the “backbone” of the central city area and provides junctures for other connections to communities, institutions and natural resources in and around the core of St. Louis.

Learn About the Design + Community Goals

Pathway to Prosperity: Missouri's Katy Trail Is a Beautiful Model for Commerce 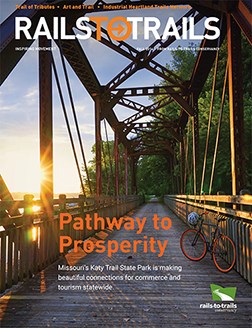 Now in its 26th year, and passing through some of Missouri’s most scenic areas, the 237.7-mile Katy Trail supports small businesses across the state and serves as a model for other rail-trail projects nationwide.

Trails and Corridors: Explore the River Ring on the Great Rivers Greenway website. Learn more about the corridors comprising the developing Rock Island Trail on the MORIT website.

The developing Rock Island Trail is a 191-mile world-class linear park project intended to preserve a major transportation corridor while enhancing communities, stimulating economic development and expanding healthy recreational opportunities in Missouri. Managed by Missouri State Parks with support from local partners, the 47-mile trail is complete between Windsor and Pleasant Hill, connecting the iconic 240-mile Katy Trail State Park from St. Louis to suburban Kansas City. The next 144 miles of rail corridor are being donated by the regional utility company Ameren and will extend from Windsor to Beaufort, just 31 miles from Six Flags St. Louis.

Kansas City, Missouri’s Jackson County is building an additional 17.7 miles of trail in 2018-19 from Lee’s Summit north to the Truman Sports Complex at I-70. A consortium is working to bridge a 5-mile gap between the county’s trail endpoint at Lee’s Summit and the state’s endpoint at Pleasant Hill.

When complete, the Rock Island Trail will create new connections for tourism and recreation as well as new opportunities for small business investment in the dozens of communities along the route. The 191-mile Rock Island Trail will connect to Missouri’s renowned Katy Trail to form a 450-miles-plus loop to Kansas City and St. Louis trail networks.

The 47.5-mile Rock Island Spur of Katy Trail State Park is notable for its beautiful woodland and wetland landscapes and scrolling fields—nestled in the foothills of the Ozarks. The beautiful crushed-stone pathway also connects to the renowned Katy Trail, which, at 237.7 miles, nearly crosses the entire state.

Pathway to Prosperity: Missouri's Katy Trail Is a Beautiful Model for Commerce

Opportunity Knocks in Missouri: RTC Steps In to Save 145-Mile Connection to Katy Trail