In 2016, DC Water (utility) issued Environmental Impact Bonds (EIB) "to fund green infrastructure (GI) projects to capture and infiltrate runoff ... and thereby improve the health of waterways." Several years later, DC Water declared the EIB a success, and noted that EIBs had been issues in other...

Bicycle and Pedestrian Safety Act of 2015 that requires the District Department of Transportation to adopt a series of policies, including Complete Streets and safety. Passed. Read the legislation.

Thanks to the grassroots mobilization of thousands of cyclists and trail users in Spring 2016, legislation that could have had negative repercussions for active transportation around the country officially died with the close of the Tennessee General Assembly’s annual session. Rails-to-Trails... 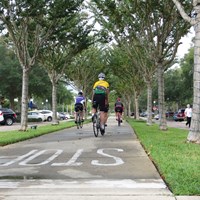 Florida: Funding Trails Through Conservation and the Ballot Box

Florida’s history of supporting environmental conservation and recreation dates back to the establishment of the Land Acquisition Trust Fund in 1963. Throughout the years, a number of programs have helped support this important trust fund—and today, Florida seeks to build on the success of these...

Your support helps us build tools like these that power local trail development.