Reclaiming Infrastructure to Revitalize a City 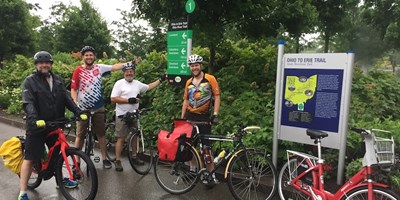 Ohio’s Year of the Trails: Three Major Trail Developments in the Buckeye State

A great city has great connections. Through three projects totaling $538 million, Cleveland, Ohio, is developing an interconnected trail and bicycling network that will link the city’s most ethnically diverse neighborhoods to the downtown area, address socioeconomic challenges, and create new opportunities for recreation, commuting, employment and commerce.

Midway Protected Bike Boulevard Network: Active transportation is ripe for growth in Cleveland, where the bicycle-commute rate stands at four times that of the state of Ohio.2 The city is focusing on improving bicycle safety through the creation of a 60-mile, landscape-buffered, two-directional bike-lane network that will connect neighborhoods and key cultural destinations in downtown and the metropolitan area. Research shows that protected bike lanes can more than double bike ridership in cities.3 The network will create safe biking and walking connections through highly trafficked areas to reduce bike-related injuries, improve mobility for residents and encourage active transportation.

Red Line Greenway: Cleveland is taking advantage of its industrial past with the adaptive reuse of former streetcar lines and disused infrastructure. The 3-mile Red Line Greenway—a volunteer-driven project on an old transit-authority right-of-way—will stimulate economic development and re-energize neighborhoods in the West Side that have struggled since the industrial decline of the 1970s. The 98 percent off-road route will connect 11 schools reaching into public housing communities such as Ohio City, Clark-Fulton and Stockyards.

1 Estimated at 17 jobs per $1 million spent, according to a study commissioned by the American Association of State Highway and Transportation Officials (AASHTO) on American Recovery and Reinvestment Act (ARRA) job creation; jobs in terms of full-time equivalents.

Here’s a look at RTC and a decade of rail-trails—their power and their impact. As the 2010s built momentum, opportunities to maximize the power of...

This year, America and the rail-trail movement saw giant leaps, and small-but-no-less-important bounds, that have helped to achieve RTC’s goal of...

A Q&A With Ryan Chao: Connecting Communities from Coast to Coast

Rails-to-Trails Conservancy (RTC) is forging ahead with a new focus: to connect critical walking and bicycling infrastructure across the country, and...