Ah, so now I understand why all my exes live in Texas...

Historically, the Lone Star State has not always been the most bike-friendliest of places, with car-centric development and a lack of a robust biking and walking culture defining many of its cities and larger towns.

The times are a'changing, however. In centers like Denton, San Antonio, Austin, Houston and Fort Worth, planners are recognizing the importance of bike (and pedestrian) infrastructure, and as a result, ridership and bike-inspired initiatives are on the up.

The city of San Antonio is expanding its bike-share program, which when launched in 2011 was the first fully developed bike-share program in the state. San Antonio Missions National Historical Park is partnering with the city, and San Antonio Bike Share, to expand the B-Cycle bike share system south of downtown to connect to the park.

Already the second-busiest B-Cycle system in America, with an average of more than 6,700 riders per day logging a total of more than 106,000 miles, San Antonio officials have set themselves the goal of further expanding the bike-share program beyond the existing 23 stations in downtown San Antonio to connect other key points of interest in surrounding areas. 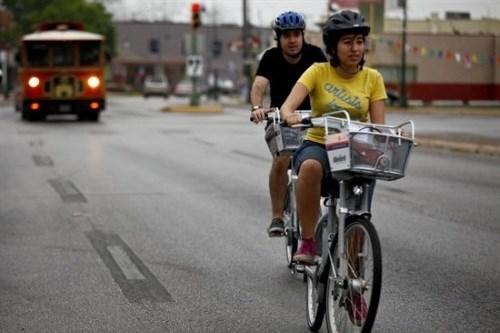 In Austin, the local energy for better bike infrastructure is so great that local businesses have kicked in $500,000 to help pay for, and manage, a bike-share system. Supported by a federal Transportation Enhancements (TE) grant, the managers of Lance Armstrong's Mellow Johnny's Bike Shop in downtown Austin and a number of other Austin businesspeople are setting up a nonprofit organization to run the bike-share program, which will feature 30 to 50 stations covering downtown and central east Austin.

Securing TE money for the bike-share system is part of a broader initiative by the city of Austin to improve their local traffic capacity and performance, and livability rating, by adding more bicycle- and pedestrian-friendly bridges and protected bike lanes. The bike-share system is expected to launch in 2013.

Elsewhere in the state, earlier this year the Texas Parks and Wildlife Commission approved more than $3 million in Recreational Trails Program (RTP) grants for 26 trail projects across Texas. The funded projects include sections of the North East Texas Trail, an ambitious rail-trail plan to develop a connected corridor from New Boston, just west of Texarkana, to Farmersville, just north of Dallas.

A large and dedicated group has committed themselves to this 132-mile trail along former rail lines, which run through beautiful Texas backwoods and unspoiled blackland prairie. When completed, it will be the longest trail system in the state, and an incredible trail tourism asset for the region.

Nice work, Texas. You're on a roll.