Are you tired of hearing that resources are limited for your trail project? That it will take decades and cost millions of dollars to complete, or that you'll never be able to maintain the corridor when it's opened? Take heart, trail champions--around the country, stories abound of trails getting developed, extended and cared for with minimal resources.

Rails-to-Trails Conservancy's Western Regional Office last month released a terrific report that gathers all these stories--of local groups and volunteers across America using their community strength to create incredible trails. It's called Community Built - Stories of Volunteers Creating and Caring For Their Trails, and you can download and read it now at www.railstotrails.org/resources. If you are an advocate or volunteer for a trail in your area, this report will be a powerful resource on how it can be done, and an inspiration to keep you going when times are tough!

One of the great stories in Community Built features the residents of Idaho's rural Valley County, which is surrounded by mountain bike, hiking and cross-country ski trails that attract tourists and provide popular recreation opportunities. In 2003, a citizens' group banded together and formed Valley County (VC) Pathways, a response to the evident need for additional trail infrastructure and driven by a sense of urgency due to a new wave of development that threatened to cover possible trail corridors.

VC Pathways created a master plan to develop 100 miles of pedestrian pathways between Cascade and McCall, which was later adopted by the Valley County Commission. Among the trail-supportive requirements of the plan is the direction that "individuals and developers who propose new developments and subdivisions must blend their proposals into the vision for a valley-wide pathways system." This language ensures that no developments are approved that would allow construction over the top of key pathway corridors. Since the plan's adoption, several new developments have provided an easement to VC Pathways in order for their development plans to proceed. 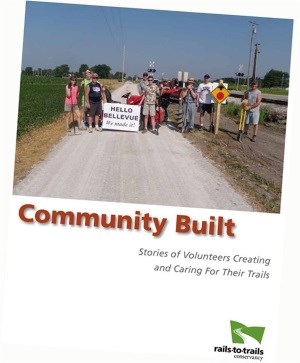 VC Pathways is constantly engaged with new projects, such as the development of the McCall-to-Cascade rail-trail, fundraisers and developing a similar pathways master plan for the city of Cascade. Most of the work is done by volunteers. Their most recent accomplishment is the quarter-mile Boulder Creek Trail in Donnelly, which was completed by a group of 16 volunteers building a 255-foot-long boardwalk across a wetland (above, right). This project was completed in just one weekend using loaned generators, power tools and hand tools. A local construction company directed the project for free; students at Donnelly Elementary assisted with bank stabilization and the installation of interpretive signs; and Idaho Fish and Game volunteers planted some 500 shrubs next to the creek. The right-of-way was granted by Hugh L. and Georgia Ann Fulton of Donnelly and Melba, who donated a pathways easement to VC Pathways and seven acres of wetlands to the city of Donnelly.