Since the nation's first-ever experiment to gauge the impact of concentrated investment in biking and walking infrastructure in America was launched in 2007, lawmakers and transportation planners have been awaiting this moment - the publication of the project data evaluating the real impact of this infrastructure on communities.

Now, the numbers are in-and data counts reveal a more positive impact than even the program's most ardent advocates anticipated.

The U.S. Congress last week was handed the statistical analysis of the first three years of the groundbreaking Nonmotorized Transportation Pilot Program (NTPP), which dedicated $25 million to each of four communities across the country to accurately demonstrate whether such investments equate to significantly higher levels of walking and bicycling, and a reduction in vehicle miles traveled.

Counts in the four pilot communities revealed an average increase of 49 percent more bicyclists and 22 percent more pedestrians between 2007 and 2010. The mode shift in these communities - how many people switched from cars to biking and walking for trips - also far outstripped the national average for the same period.

U.S. Department of Transportation Secretary Ray LaHood today described the release of NTPP data as an "eye-opening report on the value of investing in nonmotorized transportation."

Established and funded by federal transportation legislation SAFETEA-LU (Safe, Accountable, Flexible, Efficient Transportation Equity Act: A Legacy for Users) in 2005 - and with management support from Rails-to-Trails Conservancy (RTC) - NTPP set aside $100 million for biking and walking infrastructure in four communities of varying size across the country. 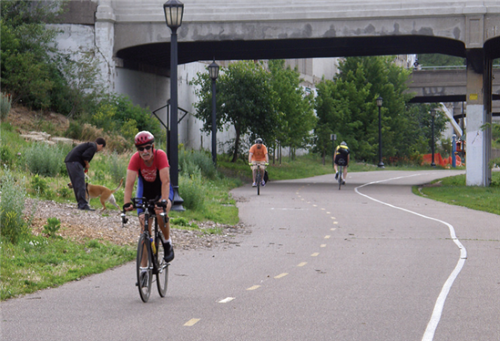 "Anecdotally, we have already heard overwhelming evidence of how each community's investment in bike lanes, trails and sidewalks has returned myriad benefits," says Marianne Fowler, RTC's senior vice president of federal relations,. "Not just helping people get from A to B but also increasing physical activity levels and energizing downtown shopping districts. These effects have been hailed by everyone from business leaders and elected officials, to health workers and teachers, across the four pilot communities. It is great to see those outcomes reflected in hard data."

Fowler says that with the evidence now in black and white before them, Congressional representatives across the nation must be compelled to recognize that continued investment in walking in biking represents terrific value for American taxpayers. Multiply the data from these four communities on a national scale, after all, and the results are simply astounding.

The report on the impact of the NTPP comes at an opportune time, with the House and Senate still locked in debate over the passage of the next federal Transportation Bill. With opponents of walking and biking infrastructure claiming it is a frivolous use of transportation funding in these tough economic times, the testimony of state and local leaders, businesspeople, residents and health officials as to their cost-efficiency and effectiveness, and data supporting their improved functioning of transportation systems, will be welcome messages.

"These are not all typical, bike-friendly cities," Fowler says. "These four communities represent a solid cross-section of America. Even in places like Sheboygan, which doesn't have urban density, has cold winters, and has had almost no experience with biking and walking initiatives in the past, locals have rapidly become champions because they have seen the real-time effects, the actual benefits to their community. The incongruous thing is that Congress, with a simple, low-cost solution to so many transportation problems right here in front of them, can't see the people for the cars."

Kevin Mills, RTC's vice president of policy and trail development, says that even though the findings of this report are already compelling, they are just the tip of the iceberg.

"Changes in behavior related to infrastructure take years to emerge, as bike paths and trails and sidewalks become familiar parts of people's daily lives," Mills says. "That we are already seeing such significant increases in biking and walking in these communities is encouraging. But it is just the beginning of the amazing shift in travel behavior that we expect to see."

"By every measure, this program has been a raging success for these four communities," Mills says. "They prove that concentrated investment in bicycle and pedestrian infrastructure produces a significant shift in the way people get around. These documented increases in trips taken on bike and by foot represent significant reductions in vehicle miles travelled, helping to cut congestion, pollution and health-care costs while increasing mobility for all citizens. These improvements represent a terrific return on investment. We hope that this compelling evidence will catch the eye of those lawmakers who are, as we speak, making decisions about America's transportation future."

The report estimates that boosting the amount of pedestrian and bicycle activity in these communities reduced the economic cost of mortality by about $6.9 million. Doctors and the broader public health community have long been advocating increasing opportunities for biking and walking as a cost-effective strategy to reduce illness and wasteful spending on reactive health care.

"From the public health perspective of reversing the intertwined trio of obesity, type II diabetes and physical inactivity, the NTPP represents a true front line intervention," says Kristina Jones, RTC's healthy communities manager. "In addition to the human burden, diabetes and prediabetes alone cost Americans $218 billion in 2007. We know that physical activity is crucial to prevention and control - prevention that in the coming years will save these communities many millions of dollars in unnecessary reactive health care."

More data on the success of the NTPP will be made available in the coming months. Stay tuned.