The next big health care breakthrough - which could cut rates of heart disease, diabetes, colon cancer, and Alzheimer's by at least 40 percent and save Americans $100 billion a year - comes from a place you'd least expect. On your block. At the park. Everywhere.

So what's this amazing treatment, which also happens to be easy, enjoyable and virtually free? It's as simple as taking a walk.

"Walking is like medicine for my patients," says Dr. Bob Sallis - a Kaiser Permanente family practitioner from Fontana, California-describing the connection between how muchtime his patients spend walking and their overall health. "If walking was a pill or surgical procedure, it would be on 60 Minutes."

"Being physically active is one of the most important things people of all ages can do for their health," explains Joan Dorn of the Centers for Disease Control and Prevention (CDC). She notes that walking ranks #1 as Americans' favorite physical activity, and that doing it for as little as 30 minutes is one way to achieve significant health benefits.

US Surgeon General Dr. Regina Benjamin announced that she is preparing a Call to Action on Walking, which is being compared to the famous 1964 Surgeon General's Report on the dangers of smoking. 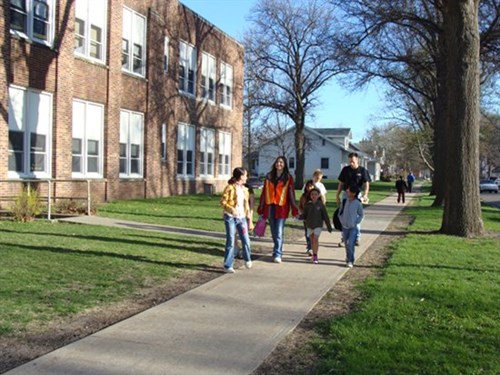 "Walking is easy," Dr. Benjamin told a group of health, business, education, and government leaders who came together in Washington, D.C. to advance a national walking movement. "Everyone can do it and it's fun. We have to make being healthy joyful."

More than 100 organizations, ranging from the National PTA to the American Lung Association to AARP to NAACP to Nike, were on hand at the meeting. Despite their wide-varying missions, the vast majority of groups agreed on two common goals: 1) Encouraging everyone to walk more; and 2) Boosting policies, practices, and investments that will make communities everywhere more walkable. A national summit to launch a walking movement is now being planned for October 1-3 - stay tuned to www.railstotrails.org for details.

"For the last 60 years, we've built our communities around cars, not people," says Rails-to-Trails Conservancy President Keith Laughlin. "We've created places where it's difficult, or even dangerous, to walk. This is a shame, because regular walking is one of the cheapest and easiest ways to improve our health. The movement to create built environments to encourage walking is now a critical public health issue."

Our country's low rate of physical activity compared to other nations is not just laziness. To get Americans back on their feet we need to make movement once again a natural part of daily life. This calls for a close look at how people are either encouraged or discouraged from walking to work, schools, shops, parks and other destinations in our communities.

Real estate developer Christopher Leinberger outlines the powerful economic arguments in favor of walking. One-third of all assets in the U.S. today are real estate, he explains, "and there is a huge pent-up demand for walkable urbanism" - a term describing cities, suburbs and small towns with sidewalks and other pedestrian amenities. "All of the growth over the next generation, if we give the market what [people] want, will be walkable urbanism," states Leinberger, who is also a research professor at the George Washington University School of Business.

And walking is on the rise. Americans are walking six percent more on average than we did in 2005. Also, young people show a preference for walking. Federal Highway Administration research shows that vehicle miles traveled by drivers under 30 dropped from 21 percent of the total in 1995 to 14 percent by 2009 - an unprecedented 33 percent reduction that marks a cultural shift by the emerging Millennial Generation. And the launch of a new walking movement offers promise for substantially increasing Americans' physical activity.

Adapted from the booklet Walking Revolution. Jay Walljasper is a writer and speaker about how to make our communities more livable, sustainable, prosperous and lively.