One of the most important services Rails-to-Trails Conservancy provides is letting the general public know when a railroad company is looking to abandon a section of rail corridor, providing an opportunity for that corridor to be preserved intact and reused as a public pathway.

This service, which we call our Early Warning System, is the very engine room of the rail-trail movement in America, and has inspired and enabled local citizens, trail advocates and municipal planners to build rail-trails in their community.

Earlier this year we sent out a notice that the Burlington Northern Santa Fe (BNSF) Railway Company had filed for the abandonment of 14.5 miles of track between Farmington and Dunfermline in Fulton County, Illinois. People in this part of the world are familiar with great rail-trails, including the Constitution Trail system, the River Trail of Illinois, and, most famously, the Rock Island Trail. 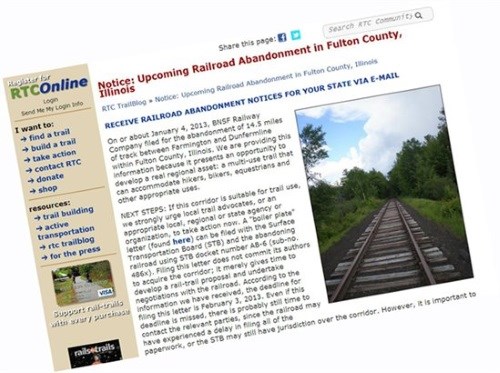 Matter of fact, it was the Rock Island Trail (below) in nearby Peoria that inspired a young school teacher by the name of Ray LaHood in his belief that trails were good for America and good for the American people. Years later, as the Secretary of the United States Department of Transportation, LaHood's experiences on the Rock Island Trail would inform his tremendous support of trail development, biking and walking.

So it was great to see the people of Canton act quickly to secure the opportunity to convert the disused corridor into a rail-trail and an asset for the local community. Last month the Canton City Council passed a resolution supporting moves to acquire the 14.5-mile corridor, with a view to building a trail.

According to this article in the Journal Star, the line has been inactive for more than 20 years. The disused corridor would complement the Canton Park District's existing plans for a more extensive local trail system, which has been funded by a sizable grant under the Federal Transportation Enhancements Program, now called Transportation Alternatives (TA).

Make sure you don't miss an opportunity to develop a rail-trail in your community: sign up for our Early Warning System now.