Yves Zsutty is a great example of how the right person in the right job can have a huge impact on an entire city's transportation landscape.

When the City of San Jose first hired someone to take a look at opportunities to expand its network of active transportation pathways, there wasn't a whole lot of bike/ped connectivity to speak of. But Yves, who stepped into this trailblazing role for the city in 2003, could see the great potential for biking as a convenient form of transportation, given the local climate and the density of high-tech employers in the city.

Ten years later and Yves' vision is playing out, with soaring rates of ridership and burgeoning demand from residents inspiring investments in an expanding trail system.

The lynchpin of that system is the Guadalupe River Trail. Broken into two sections, the longer northern section runs 9 miles right through the heart of the city, close to major employers like Cisco and Adobe, and the attraction hubs such as HP Pavilion, home of the San Jose Sharks.

In the six years Yves and the city have been counting how many people are using the trails, they've recorded steady and significant growth, including a 76 percent increase in morning bike travel during commute hours this past May. Other trail user counts have shown that of the more than 600 people who use the Guadalupe River Trail most weekdays about half of them are using the trail specifically to get to and from work, a critical expansion of traffic capacity in a region that is building more homes and more businesses. 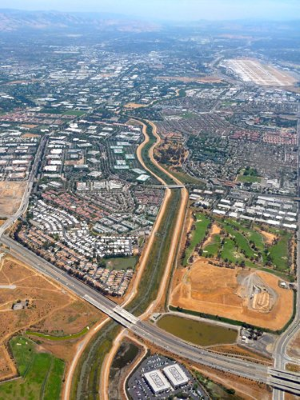 "More trails and better interconnectivity are supporting greater usage," Yves says. During his tenure San Jose has added about 20 new miles of new, Class 1 trails, and now has 55 miles in total. The city is well on its way to meeting its ambitious goal of developing a 100-mile trail network by 2022.

Built thanks to federal funding secured by Congresswoman Zoe Lofgren, the Guadalupe River Trail (left, winding its way into the city alongside Coyote Creek) has played a key role in attracting employees to San Jose's high tech industries and has encouraged new firms to make their home there. Access to trails for recreation and transportation continues to be one of the most demanded amenities by sought-after recruits.

Yves says that local partners such as the Guadalupe River Park Conservancy and San Jose Parks Foundation have been essential in supporting trail development in San Jose, helping turn flat, paved pathways into much-loved, and much-used, community assets. The American Society of Civil Engineers named the Guadalupe River Trail and its expansion plan the 2013 Bikeway and Trails Project of the Year.

A great example of the community's growing involving with the trail, Cisco Systems is deploying and showcasing new counting technology as part of the city's annual trail count next Wednesday, September 18. For more information, visit www.grpg.org