There is a hidden gem nestled in the North Shore of Lake Superior, a city with a bold trail-system vision and a passionate citizenry. Duluth, Minn., is striving to create a community where people want to live, work and play, and much of that is coming from their focus on active transportation.

Mayor Don Ness, Duluth’s champion for trails, issued a challenge to the Duluth Trail Advisory Group—that “Duluth should be the premier trail city in North America”—and he is taking action to make that vision a reality. In 2011, the final draft of the Trails and Bikeways Master Plan was published, creating a blueprint for the future as the city moves forward. 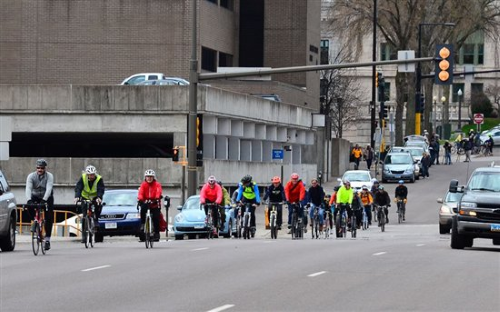 Even with a clear community vision and local government on board, Duluth still must address some major challenges. An 800-foot ridge rises from the lakefront, dissuading many would-be bikers and walkers. Lisa Luokkala, director of the Healthy Duluth Area Coalition, says that Duluth’s transit system plays a major role in addressing this “vertical challenge.”

In Duluth’s business community, there is a diversity of players at the table who have differing ideas of what a robust transportation system looks like. Reconciling those differences is a challenge, but it is one that Duluth is not stepping down from. Duluth also faces the question of how to finance and organize ongoing maintenance of existing trails, a discussion that is happening in communities across the country.

According to Luokkala, there is a ripple effect influencing trends in Duluth. “Young people are moving from larger metropolitan areas like Minneapolis and Chicago, where biking and walking infrastructure is becoming an expected norm,” says Luokkala. “This is pressuring mid-sized governments to consider and support active transportation amenities to attract new residents.”

And with the mayor’s goal of growing the city to 90,000 residents by 2020, decision makers are taking note. By instituting a Complete Streets policy, the City of Duluth requires transportation planners and engineers to consider all users—bicyclists, pedestrians and public transit riders—when designing, planning and renovating the streetscape.

Last year, Healthy Duluth hosted a hugely successful Active Transportation Week, which included Safe Routes to School seminars, tree planting along the trails, an Active Transportation and Business Entrepreneurship workshop, and a luncheon with James Oberstar, who, while in Congress, was a leader for the bicycle and pedestrian movement and continues to advocate broadly for active transportation. The outpouring of local support inspired organizers to extend the event into a month-long series this year, and by renaming the event Bus.Bike.Walk Month, Healthy Duluth highlights the importance of a comprehensive, multimodal transportation system.

And Mayor Ness wouldn’t miss it; he is leading the 3rd Annual Mayor’s Bike Ride, this time going west, heading into the historically blue collar regions of the city where much new trail development is occurring.

It has taken tremendous effort by many community members, local leaders and decision makers on the national level to bring Duluth’s trail system this far—and the work continues. One of the most exciting developments is a trail that would span the city, connecting universities and local schools and linking the Willard-Munger State Trail to the Lakewalk. Some segments of this “cross-city trail” are currently under construction, with an estimated 2017 completion date for the important connector.

Growing demand and shifting trends are pushing local government forward, and input from the community is integrated into the decision-making process to ensure that the city continues to prioritize active transportation. It won’t come easy, but Duluth continues to build a framework to become North America’s “premiere trail city.”