At the heart of Minneapolis’ world-class trail system is the Grand Rounds Scenic Byway, a series of seven segments of interconnected parks and parkways that loop around the city, acting as a key connector to the entire network of city parks and trails, and more than 300 miles of regional trails. The 7 segments are connected by 51 miles of paved pedestrian paths and (mostly) separate bike paths, as well as 55 miles of driving parkways that give the Grand Rounds its status as a national scenic byway. 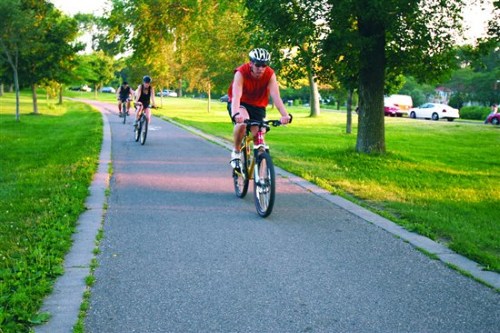 In the late 1800s, the pressures of dramatic growth in population led Minneapolis visionaries to think carefully about city planning. In 1883, the independent Minneapolis Park and Recreation Board was created. Prominent landscape architect Horace Cleveland created a blueprint for a park system that the park board followed for many decades and that eventually became the Grand Rounds. Cleveland understood the need for a growing population—and especially the poor and underserved—to have access to public recreation, and the park board acquired the park space that has provided public access ever since.

The Grand Rounds has developed and expanded over the years, most recently in the 1980s as the park board began a project to reclaim the declining, formerly industrialized central riverfront along the Mississippi River. The investment to create trails, parks and amenities for the public all along the riverfront cost $300 million in some federal, but mostly state and local, funding. This spurred more than $1.9 billion in private development along the greenway—a remarkable return on investment that demonstrates the value of investing in trails and public parks. The central riverfront continues to be a popular tourist destination, providing a generous source of tourism revenue.

In keeping with the objective to provide public access to all, the park board’s current RiverFirst Initiative is a project to reclaim the upper riverfront of the Mississippi, north of the revitalized central riverfront. Among their long-term plans for wetland, habitat and greenway restoration is an extension of Farview Park in north Minneapolis. Bisected by I-94 and cut off from the riverfront, Farview Park resides in one of Minneapolis’ most economically challenged areas. Plans to extend the park include a one-mile pedestrian land bridge to provide residents access to the riverfront via the 26th Avenue North Greenway and fishing pier.

The RiverFirst Initiative again plans to use a combination of federal, state and local dollars to expand access to public space. A critical transportation bill is pending in the state legislature that, if passed, would provide funding for pedestrian and bicycle infrastructure considered important for transportation needs. With the Grand Rounds system already used daily for commuting, it is hard to imagine that the project would not qualify.

The RiverFirst Initiative is in its initial stages, and the Farview Park extension is a long-term objective, but its completion is only a matter of time. With the same determination as the city’s original planners to provide public access to trails and the outdoors, there is no doubt that residents and visitors will one day enjoy even more trails and riverfront parks along Minneapolis’ Grand Rounds Scenic Byway.