A brief history of the Tweetsie

The 10-mile stretch of corridor between Johnson City and Elizabethton—located on the historic East Tennessee & Western North Carolina (ET & WNC) line—had not had any rail traffic since 2003. The line was no longer profitable, and its owner, Genesee & Wyoming, Inc., began to weigh its options.

Local hikers, bikers and outdoor enthusiasts were among the first to imagine something great when they saw the unused railway. By the fall of 2006, Johnson City Mayor Steve Darden had initiated negotiations with the railroad owner to obtain the corridor. Local trail advocates had long been fans of the famed Virginia Creeper Trail, a rail-trail that meanders through Grayson and Washington counties in Virginia, and thought that Johnson City should have a rail-trail too. Led by trail development consultant Dan Reese, Friends of the Tweetsie Trail was organized in 2007. The group encouraged people in the region to write letters and send emails to local government officials in favor of a trail. Ultimately, the group submitted a petition with more than 1,000 signatures to Mayor Darden and city commissioners  of Johnson City, Tenn. “This is an opportunity that could be one of the best things to happen for Johnson City, Elizabethton, Carter County and the region,” Reese is quoted as saying in a 2007 Johnson City Press article. 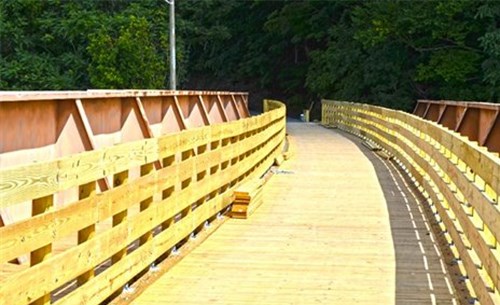 In 2009, when the ET & WNC informed the Surface Transportation Board of the railroad’s intent to abandon the corridor, RTC—through its Early Warning System—quickly notified dozens of local officials and trail advocates in Tennessee.  Mayor Darden and Johnson City commissioners were in an ongoing dialogue with the railroad and well poised to begin therailbanking process (which allows for trail development in out-of-service rail corridors until a railroad might need the corridor again for rail service). Soon, they submitted a bid for the rail property, cooperated with its owners, the Genesee and Wyoming Railway, and successfully railbanked the corridor in April 2011.

Johnson City invested $600,000 to acquire the trail, having followed federal railbanking procedures. In 2013, the city formed the Tweetsie Trail Task Force—headed by Dr. Dan Schumaier—and sought donations and in-kind services from local municipalities, businesses, families and trail advocates from across the region to fund the construction of the trail.

Alongside officials from Carter County, Johnson City and Elizabethton, as well as local trail supporters, the Task Force eventually raised $475,000 for the construction of the first 4.5 miles of the trail!

The first of three segments (with seven overpasses safely boarded and provided with railings!) is complete and ready for its first visitors.  On Aug. 28, the ribbon will be formally cut, and on Aug. 30, the surrounding communities will celebrate with a Tweetsie Trail Trek. This family-friendly event will have live music, food vendors and a bike give-away. A 4.3-mile run/walk/bike ride on the new trail—beginning at Lions Field in Elizabethton and ending at Memorial Park Community Center in Johnson City, where all the festivities are planned—will serve as the marquee activity. Bicyclists will begin their nearly 10-mile out-and-back ride at noon.  All proceeds will go toward the maintenance and development of the new trail.

The Tweetsie Trail Trek will culminate years of hard work by a visionary and persistent cross-section of supporters, including local elected officials and community advocates; the entire region is abuzz about the event!

Looking to the future

According to Dr. Schumaier, the final two segments of the Tweetsie Trail could be completed in 2015-16. When all 10 miles of the trail are constructed, it will run from Stateline Road in Elizabethton to Alabama Street in Johnson City, and connect with Johnson City’s greenway to East Tennessee State University. This will make it the longest rail-trail in Tennessee and push the state’s total rail-trail mileage past the 100-mile mark.