In this post, as RTC continues our month-long focus on Washington State, we are pleased to explore a local community's transformation into a more walkable and bikeable place, and the nostalgic passion of one local champion who put the gears in motion.

Ask Maureen Hoffmann what ultimately inspired her to start WABI Burien (Walk/Bike Burien)—a Washington-based nonprofit dedicated to promoting walking and biking in the Puget Sound community—and she’ll reply with an answer that is somewhat unexpected, but perfect in its simplicity: Italy.

“I had just moved back from living in Italy and had loved getting around by foot, bike and train while there,” says Hoffmann. “I didn’t have a car.”

Unfortunately, upon Hoffmann’s return to the States, she noticed how less walk-bike-friendly her own beloved hometown of Burien was. It inspired her to take action.

In 2011, she launched monthly Walk-n-Talks to encourage active living, initiate conversation and nurture an idea of the Town Square as the “living room” of Burien. “I just printed some cards and dropped them off at local restaurants, and sent a notice to a local blog. And people just showed up,” states Hoffmann.

And, it was also around this time that Hoffmann and others began to take note of a particular challenge for bicyclists: the lack of available places for individuals to lock up their bikes, both in public rights-of-way and commercial centers.

“We started gathering together and having conversations,” says Hoffmann. “We asked ourselves, ‘How can we make it happen? How do we get more bike racks in town?’”

And thus, what began as a simple idea became a formal call to action. 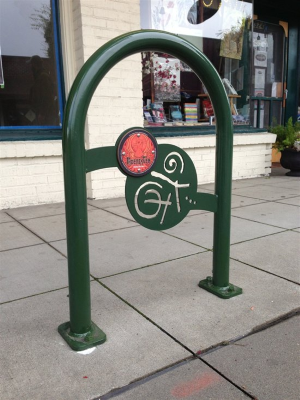 They organized. They picked board members and registered as a 501(c)(3) with Washington State and the federal government. They reached out to others. And then—by way of Michael Lafreniere, director of Burien Parks, Recreation and Cultural Services—they got wind of grant monies available from the Washington State Community Economic Revitalization Board. Due in a week.

“We found out on a Friday, and the grant proposal was due the following Thursday,” Hoffmann adds, with a good-natured laugh. She and WABI Burien Vice President Brooks Stanfield “hunkered down,” and low-and-behold, they hit pay dirt in September 2012 in the form of a $10,000 grant to install bike racks—41 in total—around town. The money was awarded to the City of Burien, with the project to be managed by WABI Burien in partnership with the parks and recreation department.

The objectives of the project: to promote more bike use and sustainable transportation and to encourage support of local businesses.

Hoffmann, who is a graphic designer by profession, created a custom-design for the bike racks (photographed above) meant to visually enhance local space while offering utility for cyclists. Additionally, WABI Burien launched a bike-rack sponsorship program (with visibility in the form of a five-year custom logo plaque) that, in three days, saw all 41 bike racks claimed, raising $7,800 for additional bike and pedestrian projects and activities.

By June 2013, the project partners had successfully installed 23 bike racks in strategically chosen public areas. And while Hoffmann notes some challenges in communicating with owners of local shopping centers in order to install the last 18 bike racks—“Some of the owners are out-of-state, and installing a bike rack in Burien is the last thing on their minds!” states Hoffmann—assistance from Burien’s Economic Development Director, Dan Trimble, in connecting with the owners is proving fruitful.

“They’re calling him back!” she affirms, triumphantly.

Of course, the local community response to the bike racks has been extremely positive. Hoffmann cites an example—again, with perfect simplicity.

“I was taking a picture of one of our bike racks in use at a coffee shop, and I went inside and noticed there were three people watching me with interest—one of them the cyclist. I stopped to talk to him, and he [later] sent me the most wonderful e-mail. He and his wife recently moved to a block of condos in Burien's Town Square. He told me they now feel comfortable to ride their bikes around town to do shopping because they have a safe place to lock their bikes up. It’s exactly what our objectives were!”