Throughout the month, RTC has provided evidence and stories of how active transportation and physical activity are good for your heart. Increasing physical activity, specifically through increased trail use and trail access, is of particular importance to us—especially in underserved communities. As Dr. Ted Eytan explained in his guest blog earlier this month, not having the ability to walk around outside in one’s neighborhood, and not having safe access to the outdoors, can have a significant effect on a community’s health. And these are significant challenges in lower-income neighborhoods, where crime, litter, graffiti and lack of access to trails or walking infrastructure tend to be prevalent.

RTC worked in Compton, Calif., for several years as part of our Urban Pathways Initiative (UPI), sponsoring trail-based activities to promote increased physical activity and active transportation. As an end to RTC’s Heart Month series, here are some examples of how we helped to positively impact this passionate community. Enjoy! 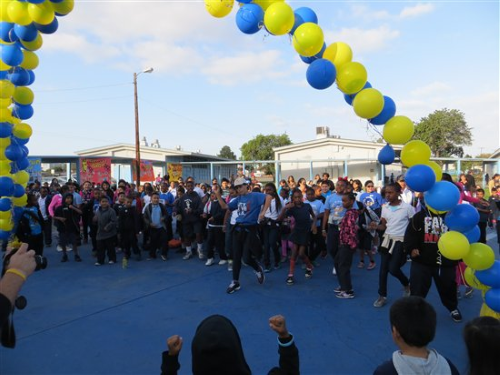 In October 2013, in partnership with the Compton School District, the City of Compton and the Let’s Move! Campaign, RTC organized a Walk to School Day at Tibby Elementary School. In the photo, a Let’s Move! Representative is leading kids through stretching and exercises before the start of the school day.

RTC was involved with a 5K walk held in Compton in February 2011. The route went by theCompton Creek Trail. That’s the mayor pushing his kid in a stroller. He told me he actually used to use this trail when he was growing up in the area!

Here’s another great event we held in Compton in May 2013; our primary emphasis was to clean up a section of Compton Creek. Yes, that is someone who is picking up trash along the creek while wearing a large kangaroo head! She was doing this as part of a competition to win a prize that would have sent her to Australia.

And last but not least, RTC's Compton Bike Fest was held in May 2011 in order to teach kids in the area bike safety skills. It was educational and fun.