When we asked Floridians to name their favorite trails in the state, two things became clear:  they know their favorites, and they’re passionate about them. And who wouldn’t be, with the beautiful, flat terrain, and diverse plant life and fauna that can be seen and enjoyed every month of the year?

To culminate our tribute to Florida this month, we are pleased to present this list of 10 top trails in Florida, chosen straight from the users who know them best.

And may we add:  While some stars really “shone” through in sheer numbers of votes, we couldn’t help but notice the zeal and loyalty people had for others, making these picks no less relevant as far as we’re concerned. 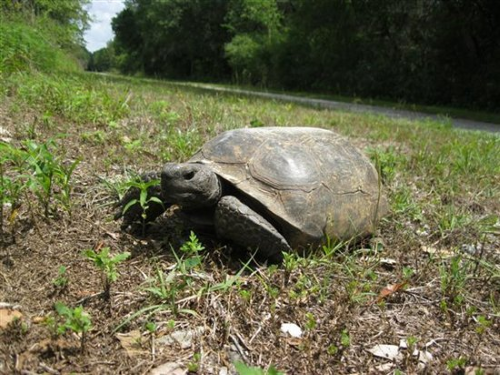 “The 46-mile Withlachoochee State Trail is so beautiful. I’ve seen gopher turtles, brown rabbits and even deer. It has a lot of shade from the hot Florida sun…[and] the mostly flat trail provides wonderful scenery. I ride every chance I get and never get disappointed.”

One of the longest rail-trails in the state at 46 miles, the Withlacoochee boasts 10 trailheads, information kiosks, artwork, parks and plenty of local eating and drinking establishments as it winds through six localities.

For history nuts, there are remnants of the trail’s early railroad days, including cement mileage and whistle markers, the Lake Henderson Trestle and a restored 1925 caboose (at the Inverness trailhead).  And for those of you curious about the name (we certainly were), “Withlacoochee” is an American Indian word meaning “crooked river”—a designation given to the body of water, now a state paddling trail, that parallels the pathway.

“We love the Pinellas Trail. It is long enough for a variety of rides, helps you escape the noise of Route 19 and goes through a variety of towns.”

The first stretch of this trail opened in 1990, and today, the Pinellas Trail is one of the busiest trails in Florida, averaging 977,241 users per year. Its first 15 miles from St. Petersburg cross dozens of pedestrian bridges, the most scenic being the 0.25-mile Cross Bayou Bridge spanning Boca Ciega Bay.

The trail also passes through the historic downtowns of Dunedin (the Gulf of Mexico is just two blocks away), Tarpon Springs and Palm Harbor, and connecting trails lead to a variety of parks as well asHoneymoon Island State Park—dubbed so in 1939 when bungalows were constructed to—yep, attract honeymooners!

The entire trail is accessible to wheelchair users and persons with disabilities.

“I bought a home on the West Orange Trail in Winter Garden specifically so I could cycle most days... There are several trails close by, [offering] a choice of semi urban or completely rural. [I] always see plenty of wildlife, which is such a bonus.”

The proximity to Orlando makes this urban + rural rail-trail very popular.  Just 15 minutes northwest of downtown, the route passes through 1950s communities that formed around the once-thriving Orange Belt Railway.

Killarney Station, a modernized version of an old-time train depot, anchors the southern trailhead (you’ll find bike rentals, restrooms and water there). From there, you’ll go through the quiet, wooded community of Oakland and the lively downtown of Winter Garden, before passing through miles of thin woods and occasional orange groves.  Beyond is Apopka, a fast-growing Florida community.

“Gainesville-Hawthorne, [my] most frequented, is a little heaven on earth.”

“The local community is very proud of this trail and justifiably so. Highly recommended if you're looking for an active pursuit in Southwest Florida.”

This trail covers 10.6 miles of mostly undeveloped land along the former Seaboard Air Line rail corridor, which is known for having helped transport Ringling Bros. and Barnum & Bailey Circus to its winter destination in Venice for more than 30 years. Users of this trail can enjoy a diverse collection of wildlife, parks, historical markers and scenic waterways.

A bypass over U.S. Route 41 allows for a direct connection with the Venetian Waterway Park Trail at the historic Venice Train Depot, forming a continuous 20-mile route between Sarasota, Osprey, Laurel, Nokomis, Venice and South Venice, and ending at Shamrock Park and Caspersen Beach Park. Passionate locals are currently leading efforts to extend the trail north to downtown Sarasota from its current end point at Culverhouse Community Garden.

“I really like the laidback feel of this suburban, surprisingly scenic trail.”

Running along the former line of the Orange Belt Railway, the Seminole Wekiva Trail offers those starting off at Altamonte Springs a rural environment, with wildlife and plenty of trees for shade in its first seven and last four miles. North of mile marker 7, the mood shifts to a suburban atmosphere with neighborhoods, shopping centers and ample places to eat, water up and relax. Just past mile marker 9, a spur trail on the right leads east to a pedestrian bridge over I-4, before joining the Cross-Seminole Trail.

The trail’s showcase attraction can be found in the middle of the route; it’s here that users can view an outdoor wall of eye-popping color portraits—including celebrities, sports figures and historical personalities—painted by local artist and carpenter Jeff Sonsken.

This flat, extremely straight and very picturesque pathway runs through some of Florida’s most-scenic rural landscapes. Stretching from Polk County north to the town of Mabel on SR 50, at least one-third of the trail crosses through one of the state’s most protected areas, the 322,690-acre Green Swamp, which offers an array of popular hunting (wear orange during hunting season!) and paddling destinations along the Withlacoochee (South), Hillsborough and Peace Rivers. Users might also get a glimpse of its diverse wildlife in the form of feral pigs, armadillos, buzzards, tortoises and alligators.

The Polk City trailhead offers parking, picnic and restroom facilities, and expansive fields of clipped grass for recreation and relaxation. From Polk City, users might also head south to Auburndale along the Auburndale TECO Trail.

“[The top trail in Florida]…it’s got to be the Cross Seminole trail for me! It runs through the neighborhood here in Tuskawilla…easy access and immaculately maintained…”

This trail is an important non-motorized resource in an automobile-dominated region, stretching from Orlando’s densely populated outskirts to the communities of Oviedo, Winter Springs and Lake Mary. Along the way, users might take in some fun and sun at Central Winds Park, the county’s premier public park in Winter Springs. The trail also runs through Spring Hammock Preserve, home to some of Florida’s ancient cypresses as well as a variety of community parks.

The Cross Seminole Trail offers connections to the 14-mile Seminole Wekiva Trail and the 6-mile Cady Way Trail, and is the first in the nation to be designated as a Purple Heart Trail in honor of America’s wounded veterans.

“Definitely one of my favorites. The 15 miles of the trail are almost entirely under a tree canopy. Some very pretty countryside…near downtown Jacksonville.”

This trail—one of North Florida’s oldest—runs through a rural setting of hardwood uplands, wetlands and pine flatwoods near Jacksonville’s lively downtown area. The heavily treed pathway is a haven for flying fauna such as hawks, wood storks and belted kingfishers, among others, and a range of other wildlife.

At the Imeson Road Trailhead, the closest trailhead to Jacksonville, users have access to restroom facilities, benches and a separate equestrian trailhead. Midway through the trail is the Camp Milton Historic Preserve rest area, once home to the largest encampment of Confederate troops during the Civil War; the site features the remains of a mile-long defensive works, a re-creation of a 19th-century homestead and bridge, an arboretum and extensive boardwalks!

“Excellent long-distance workout ride. A well maintained trail with long distances between road crossings. It makes it very easy to crank away the miles with no worry about cars.”

The Suncoast Trail is a popular means for fitness and nature spotting among Tampa Bay area residents, passing through a mix of suburban, agricultural and rural areas—including four public parks and a number of bodies of water—as it parallels the Suncoast Parkway.

The trail also connects users to the Jay B. Starkey Wilderness Preserve, one of the largest undeveloped tracts of land in Pasco County. This property boasts an array of pine flatwoods, cypress domes, marshes and swamps, and other wetland features. Within the preserve is the 8,000-acre Jay B. Starkey Wilderness Park, a popular destination for bird watching, fishing and hiking.

2. The Rock Island Trail Is a 144-Mile Would Be Game-Changer for Missouri

4. 7 Top Trail Picks From Trail Lovers Like You on TrailLink!

5. Five Common Types of Trail Use Rules (Everyone Should Know)

Find your next trail adventure with our guidebook series, including new New England and Midwest guides: