"It's been one of the most positive things to happen for the community. We get so many users on it, and people see the positive impact it has. Everything we hear about the expansion of the trail system has been positive."

A dusky red barn sits atop a grassy slope as wispy white clouds stir in the sky above; a placid cow strolls by and a creek runs playfully beneath a small wooden bridge. This scene, seemingly from some sweet dream, is the everyday reality on the Macomb Orchard Trail. About 30 miles north of Detroit, Mich., the rail-trail is pure rural Americana, a paved ribbon winding through rolling farm fields, vivid green tree canopies and friendly Midwestern towns.

"People are discovering their county like they never have before," says Don Brown, a Macomb County commissioner whose district includes the communities along the trail. "From the trail, you get a different perspective of the county than you would from a car. You see farms and open space and wooded areas. The trail passes through all of that. You really see where you're living." 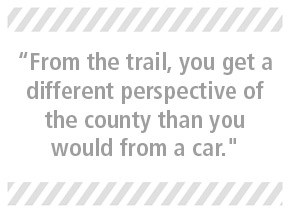 Michigan is one of the top apple-producing states in the nation, and the trail's name and distinctive features—such as picnic pavilions topped with cheerful barn-like roofs—are nods to the rich agricultural heritage of Macomb County, known for its apples and peaches. Many of the farms here have been family-owned for generations. With more than 2,300 miles of rail-trail and counting, the state is also leading the country in completed rail-trail mileage. On the Macomb Orchard Trail—an unmitigated success since its completion in 2011—one feels not only the pull of its idyllic past, but also the possibilities of a bright future.

At every level of government, the Michigan citizenry is rallying around its trail system with gusto. In 2012, Governor Rick Snyder gave the effort a major kick forward when he unveiled a plan for a connected trail network stretching more than 600 miles from Detroit through the Upper Peninsula to the Wisconsin border. The plan's ambition astonished even the most enthusiastic trail advocates.

"It's profound, the backing we get for these trail projects from the governor's office on down," says Brad Bates, deputy supervisor for Shelby Township, one of the communities that the Macomb Orchard Trail connects. "It definitely makes it an easier row to hoe when you have such strong support from the county, state and federal government."

A much smaller project, but perhaps no less significant on a local level, is the rapidly developing 70-mile trail loop around the county. The Macomb Orchard Trail is a key piece. The loop will link Stony Creek Metropark—one of the region's largest and most popular parks—with the beaches of Lake St. Clair and several other parks in between.

"The loop will provide great connectivity," says Macomb County Executive Mark Hackel. "It brings the county together and provides a tremendous recreational opportunity."

Already, the Clinton River Trail is just a hop across the street from the Macomb Orchard Trail's west end, so travelers can continue their journey another 16 miles west and, in turn, link to the nine-mile Paint Creek Trail.

"When we were first trying to get support for the Macomb Orchard Trail, people were questioning it," says Joe Youngblood, parks and recreation director for Shelby Township. "But it's been one of the most positive things to happen for the community. We get so many users on it, and people see the positive impact it has. Everything we hear about the expansion of the trail system has been positive."

For a rural county with tight purse strings, the expense of developing a trail like this takes on particular importance.

"Shelby Township is a pretty cautious, conservative community," says Rick Stathakis, supervisor for Shelby Township, which anchors the west side of the trail. "These were some big investments, so we did our homework. We looked at the numbers several times, but saw the many benefits that the trail would have and there was no way we could say no to this."

Fortunately, the project had a major champion in U.S Rep. Candice Miller (R-Mich.), a lifelong resident of the county and an avid trail supporter.

"Biking and hiking trails, particularly our Macomb Orchard Trail, really enhance communities, providing residents with a valuable outlet for recreation and outdoor activities," says Miller. "I really believe that the Orchard Trail improves the quality of life for those who can take advantage of it, which is why I worked so hard to secure funding for its construction. Since its completion in 2011, many residents have enjoyed this beautiful trail, and it has become an important asset to the community."

Of her support, Brown is effusive. "She secured $3.7 million for the trail and it was a shot in the arm for us. With that funding, the county was able to pave the first half of the trail. It helped to accelerate the work, and we were able to surpass all of our expectations."

Now that the trail is such an important character in the county's story, it's hard to imagine what it once was. "The railroad bed was trashy and unkempt," says Youngblood. "There was no reason for anyone to maintain it. Kids would throw litter and their Slurpee cups out there, but, since the trail has been built, those issues are gone now. You won't see any trash. Users take pride in helping the trail look good."

Back in 1998, when the Canadian National Railroad first put the railroad corridor up for sale, a group of Macomb County residents jumped on the idea of turning it into a trail. They quickly formed the Friends of the Macomb Orchard Trail and garnered the support of the Macomb County Board of Commissioners, who negotiated with the railroad to reduce its price and successfully made the purchase with financing from the Trust for Public Land.

"There were early concerns when the property was for sale that the rail line could sell the right-of-way to individual landowners in pieces," says Brown, involved with the project since those early days. "We wanted to avoid that and buy it in one piece. It was an incentive for us to act quickly."

Once the corridor was purchased, a collaborative group of stakeholders from the county, municipalities along the route and the Huron-Clinton Metropolitan Authority came together to form the Macomb County Trail Commission to direct how the trail would be developed and managed. Members of the commission pay an annual fee to cover the year-round maintenance of the trail.

Today, the results of the effort are clearly visible. Restaurants adjacent to the trail offer outdoor patios and bike racks, and new bike shops and other businesses are popping up to service trail users.

"We don't have the data points yet," says Stathakis. "But we're certain of the economic benefit of the trail. For example, there's a Dairy Queen next to the trail, and there will be 30 to 40 bikes packed in front. No question about it, the trail brings business."

In addition to its economic impact, the enhancement to residents' quality of life is one of the key reasons behind Hackel's support of the trail. "There has to be a balance in the community," he says. "You can't just have roads. Parks and recreation are part of a community, and I consider trails linear parks."

Stathakis couldn't agree more. "The walkability of a township is related to the general health of a community. We want people going out and walking around, [and we want] more people biking instead of taking a car."

A lifelong resident of Shelby Township, Youngblood remembers walking the old railroad bed with his friends as a teenager. "Now, I see the trail and it brings back memories. It shows how a community can come together to take something not being used and turn it into a beautiful pathway."

Brought to You By:

July's Trail of the Month is made possible by the generous support of Club Ride Apparel.

Club Ride is designed for an epic ride on your favorite trail, a cruise around town, your daily commute, an evening at the local pub, or just a day at the office.

Getting there: The nearest major airport is Detroit Metropolitan Airport, about an hour south of the trail.

Access and parking: To reach the trail's eastern trailhead in Richmond, take I-94 and exit west onto Fred W. Moore Highway/Division Road. Turn right onto State Route M-19/Main Street. Turn left onto Water Street. The trailhead is at the intersection of Water and Parker streets.

Reach the trail's western access point in Shelby Township from a parking lot on the west side of Dequindre Road just south of 24 Mile Road/Parkdale Road.