Here's a great wrap-up of the 12th Annual Greenway Sojourn by RTC's Katie Harris!  Katie talks about the impact of the trip on her, her fellow riders and the communities through which they had the pleasure of passing through during their six days together. 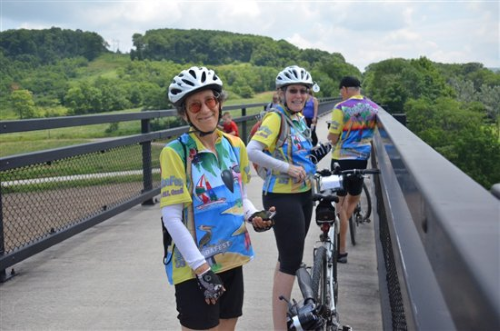 The sojourn began on the Panhandle Trail, right outside of Wierton, W.V. Eager to hit the trail after the bus trip from Cumberland, we enjoyed the 27 miles to Cecil Township, Pa., connecting to the Montour Trail about 20 miles into the ride. Day Two was a much bigger feat, with 51 miles to tackle before we arrived at Cedar Creek Park, but the Montour Trail kept all the riders captivated.

We rolled into Glassport, Pa., around lunchtime, and the folks at Max and Odi’s were ready for us! The Montour Trail’s eastern terminus is right outside of Glassport, and the connection through town to join the Great Allegheny Passage is on road. This was an opportunity for sojourn participants to give feedback to the town through a bikeability survey conducted by RTC. Through this survey, riders will help shape the way Glassport serves cyclists visiting their community.

The remainder of our ride was on the famous Great Allegheny Passage (GAP), the longest rail-trail east of the Mississippi and a member of RTC’s Rail-Trail Hall of Fame. Following the Youghiogheny River, commonly referred to as the “Yough,” and then the Casselman River a few days later, was a highlight for me. From the screeches of glee from whitewater rafters on the lower Youghiogheny to the serene fisherman along the banks near Confluence, it was evident that the people in this part of Pennsylvania were enjoying their time outdoors.

The rail-trails in the region fit into that picture perfectly. I was inspired to see smiles plastered on the faces of our riders, but I was equally excited about the grins of locals out enjoying the trail by foot or on bike. These trail systems are used by tourists and attract cyclists from around the country, but the trails here are also cherished by the local communities as well—as an incredible asset.

The Greenway Sojourn is a far cry from the traditional, supported ride. The vast majority of riding during the sojourn is on trails, away from traffic and within corridors of green space. Furthermore, the sojourn offers opportunities to gain insight on the trail building process. This year, sojourn riders were able to be a direct part of two projects: a groundbreaking for a section of the Montour Trail (with gold shovels and all!) and the Pinkerton Tunnel project, presented to the group during an evening session by Linda McKenna Boxx, president emeritus of the Alleghany Trail Alliance. The Pinkerton Tunnel is in the fundraising stages, and riders learned about the history and future plans for the structure during Boxx’s presentation on the fourth night of the trip.

The following day, riders approached the barricaded tunnel and envisioned how the ride would be different after the project is completed. “You peer through the tunnel; it is 800-feet long but you have to ride one and a half miles around!” said, Boxx, adding that the winters are harsh in that region of Pennsylvania, and that is why the tunnel deteriorated. “RTC stimulated our thinking about how to get this done,” she said.

And it’s not just visitors that want to see this project complete. Boxx recounts a story about a local donor’s desire to see the tunnel in working order. “I had a 90-year old gentleman who made a donation, and he saw me on the street and said, ‘When is that tunnel going to be opened? I’d like to see it during my lifetime.’” They are working toward their $100,000 goal, and with contributions from the Confluence Tourism Association, RTC, and individual sojourn riders, they are on their way.

Day Four signaled a break in the biking action as sojourn participants enjoyed a day off from riding and used the free time to go whitewater rafting, stroll around the local town and visit the architectural wonders of Frank Lloyd Wright’s Fallingwater and Kentuck Knob. The day concluded with a concert in the pavilion in the quaint town of Confluence, our home for two nights. The only thing that broke the attention of the audience was the occasional train that rumbled past. Between strums on their guitars, the musicians informed us: “We’re used to it by now; we just have to figure out how to work the train into the song!”

The town rolled out the red carpet for the sojourn and stole the hearts of a few of the riders. Stay tuned for more details about Confluence and other towns along our route.

It was back on the bikes on Day Five for a shady and scenic 32-mile ride to Meyersdale. A few riders took a long lunch in Rockwood—some to watch a World Cup soccer match, others to visit the restored Opera House. As was the case in most of the towns we rode through, I arrived with a list of things I wanted to see and left with an even longer list of reasons to return.

Our departure from Meyersdale on Day Six was bittersweet. Between the lasagna dinner and the pancake breakfast, local organizations fed us well and made us want to linger. But the trail was calling, and the perfect weather and the promise of a long downhill from the Eastern Continental Divide to Cumberland got me on my bike. I savored those last miles, cruising along the GAP in the warmth of a June afternoon. We were expecting to see the train that runs from Cumberland to Frostburg, and when we heard it approaching, we returned the waves of the train passengers with equal enthusiasm, all of us thrilled to see the rail-with-trail in action.

It was a journey of 191 miles over six days. Some of the riders were seasoned sojourn veterans, others were new to the sojourn, and others were taking part in their first multi-day ride. One thing we all had in common, however, was a passion for being out on the trail.

This ride requires tremendous effort from local communities and volunteers, and a big thanks goes out to all that contributed to this year’s event. The Pennsylvania Department of Conservation and Natural Resources is a major partner, and RTC thanks them for their support. Tom Sexton, RTC's northeast regional director, has been orchestrating this event since the beginning and deserves a round of applause for the hard work he has put in year after year. It is the enthusiasm of the event organizers, participants and community contributors that make the sojourn a success. We hope you’ll join us next year! 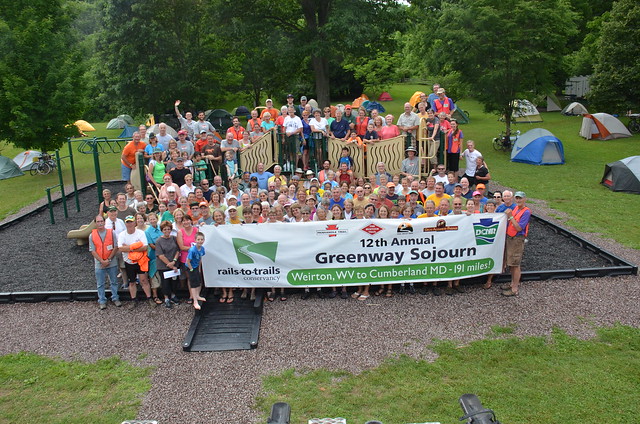