The trail world is filled with inspiring people. Some are folks that use and celebrate the pathways in their community on a daily basis. Others are champions, enacting change and making decisions that help the trails movement. And some, like Teton County, Wyo.’s Commissioner Melissa Turley, are both.

In her role as county commissioner, a position that she has held for a little more than a year, she has developed and adopted the first-ever strategic plan for the Board of County Commissioners focused on a shared vision to ensure a healthy community, environment and economy for Teton County. Turley was also a strong supporter of the construction of two vital sections of pathways in Jackson Hole, which connect communities within the valley and strengthen the existing trail system. She has a lot on her plate, but she makes active transportation a priority and frequently integrates it into her mission as an elected official.

I caught up with Turley to learn more about her involvement with the trails in Teton County and to find out what her most memorable experiences on bikes and trails have been so far.

Here’s what she had to say:

1. Her first overnight ride with her mom

“Both of my parents were avid cyclists,” affirms Turley. Her mom took her on her first overnight trip as a 12-year-old girl, a one-night tour that Turley says was incredibly empowering. But it wasn’t just touring that Turley’s parents brought to her. “[Growing up], bikes were a way of life, whether for transportation, riding to Sunday brunch, racing or long-distance rides,” states Turley. Cycling as a lifestyle has stuck with her to this day. 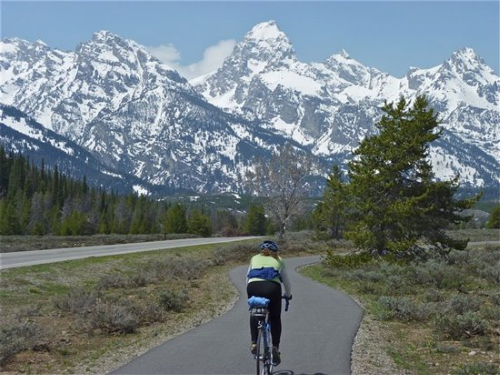 Jackson, Wyo., is a gateway town to both Grand Teton and Yellowstone national parks. Thanks to the hard work of many agencies, organizations and individuals, there is a paved bike path that begins in the town of Jackson and runs 15 miles north into the Grand Tetons, flanked on one side by the National Elk Refuge and on the other by the majestic peaks of the Teton Range.

Turley says she loves riding that section of trail because of all her fellow riders, adding that it provides a transportation and recreation outlet for locals while shining a spotlight on the community.

3. Commuting to teach her spin class

Not limiting herself to biking outside, Turley has been spinning indoors for more than 10 years. She joined the ranks as an instructor in 2012. Weather permitting, Turley rides her bike to teach her spin classes. And an extra bonus: “It’s a great warm-up and cool-down!”

The outpouring of support for community pathways is inspiring to Turley, and this goes beyond just trail use. “Any time a ballot initiative comes up that would help fund bike or pedestrian projects, it is passed by the voters by an overwhelming majority,” Turley reports. To complement the point, she mentions an inspiring mode shift that took place last summer when major construction took place at one of the central intersections in town. Instead of driving, many people hopped on their bikes to avoid the extra traffic around the site.

“I had people approaching me and telling me that they were surprised at how much they enjoyed commuting by bike; it didn’t take that much longer to arrive and it was surprisingly fun and low stress!”

Turley touts the benefits that trails bring to the environmental, health and economic sectors of a community. “By supporting pathways and other bike infrastructure, we make it easier for those who do choose to drive. We all win when we get people out of their cars,” she says.

5. Riding with her son George

Instead of being stuck in a hot car, the mother-and-son duo are riding together.

“I commute with [my son] as much as I can,” says Turley. “It is a fun way to get around! We can talk, play and laugh; we interact with each other and our community.”

Turley wants to instill the same values in George that her parents instilled in her—that cycling is not just for recreation or exercise, it can also be transportation and a release.

“On my bike is where I find my peace,” states Turley. “I want to be teaching that to George. I want him to find that peace as well.”