RTC is excited to announce Marianne Wesley Fowler of Alexandria, Va., as this year’s Doppelt Family Rail-Trail Champion—a designation honoring Fowler’s incredible contributions to RTC and the rail-trail movement over the past two-and-a-half decades.

Established through the generous support of the Doppelt family, this award program was designed to honor individuals who have made significant contributions to the rail-trail movement through their work, volunteerism or support—in short, people who have gone above and beyond in the name of trails. 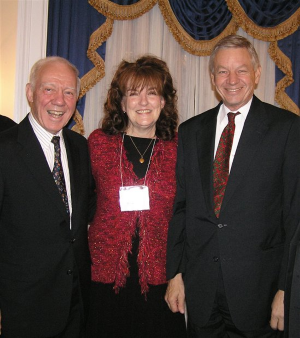 Since joining the RTC team in 1988, Fowler has played an incredible role in the development and support of rail-trails across the country. As southern organizer in the late 1980s and early 1990s, she helped bring about the region’s first rail-trail networks, including the creation of the now-legendary Silver Comet/Chief Ladiga Trail and the early identification of the Atlanta BeltLine as a potential rail-with-trail in her 1991 "Abandoned Rail Corridor Assessment Report" of the Atlanta Metropolitan Area.

Later, as a leader of RTC’s policy advocacy team, she was pivotal in helping to protect hundreds of millions of dollars in federal funds for trails, and walking and biking infrastructure—having played an active part in the reauthorization of four federal transportation acts, including ISTEA, TEA-21, SAFETEA-LU and MAP-21—and was also key in the establishment of the Recreational Trails Program and the Safe Routes to School Program.

She has also been critical to protecting the federal railbanking statute, and served as a lead national organizer for the Nonmotorized Transportation Pilot Program (NTPP)—in which infrastructural improvements in four U.S. cities have thus far resulted in 85 million miles of active transportation as opposed to driving.

With her designation as a Rail-Trail Champion, she joins the ranks of a select group of men and women who’ve made remarkable contributions to rail-trails, including the late Fred Meijer, founder of the Fred Meijer Trails Network, the U.S. Department of Transportation Secretary Ray LaHood, the late Minnesota Congressman James Oberstar, and Joshua David and Robert Hammond, founders of New York’s High Line.

“Marianne has been a pinnacle player in the rail-trail movement, and her advocacy has helped establish walking and biking networks around the country,” said Keith Laughlin, president of RTC. “We’re pleased to honor a person who’s been a true game-changer to active transportation in America.”

In the 2014 Green Issue of Rails to Trails magazine, launching on June 11, Fowler—RTC’s resident storyteller—will talk about the early days of the rail-trail movement, defending federal funds in Congress, and the creation and success of NTPP. As she talks about these moments in rail-trail history, her passion—never wavering in 25 years—is evident.

Later this year, RTC will honor her in a special event to commemorate her achievements.  Stay tuned!