"When we're out on the trail, there are always mobs of people. The BeltLine is changing the way that people live in a really profound way."

Spring is upon us, and perhaps no region is more thankful than the South, hit especially hard by an unusually brutal winter. Residents of The Big Peach are more than ready to head out on the Atlanta Beltline to soak up the warmer weather. In a city once known as Terminus, the BeltLine trail network is a re-envisioning of its railroad past for a new wave of pedestrian and bike-friendly urban design.

"We have an electric counter on the Eastside Trail, and it logged 9,700 people on the trail this past Sunday," says Lee Harrop, program management officer for Atlanta BeltLine, Inc. "There was no one in Atlanta sitting on their couch."

The two-mile Eastside Trail, which starts at Piedmont Park, the crown jewel of Atlanta's park system, is one of the most popular segments of the BeltLine. And perhaps there's no prettier time to enjoy it; this month, showy pink and white blossoms—the stars of the guided Magnolia Tree Walks hosted by Trees Atlanta, which has planted hundreds of trees along the BeltLine—will be on full display.

Three other BeltLine trails, West End, Northside and the Southwest Connector, have also been built around the city and total about seven miles. All are paved. Another three trail segments awaiting development (totaling about four miles) are available as natural hiking trails in the interim. Eventually, the trail will connect more than 40 neighborhoods.

"The minute we start connecting them together will be an incredible day for the city," says Ed McBrayer, executive director for the PATH Foundation, which manages the construction of the trail. "People are starting to exercise that never used to, and the trail's proximity to their houses seems to be the key. The BeltLine has a significant impact on the health of the people around it, no doubt about it."

Even at this stage, with only a handful of its proposed 33 miles completed, Atlanta BeltLine, Inc., which implements the project, estimates that the annual trail usage exceeds a million people. 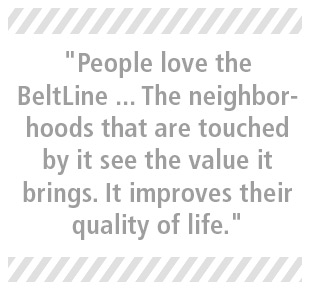 "People love the BeltLine," says Curt Soper, Georgia/Alabama state director of the Trust for Public Land, which helps acquire the land for the trail. "The neighborhoods that are touched by it see the value it brings. It improves their quality of life."

Rather than the straight line of a typical rail-trail, the growing BeltLine will form a 22-mile loop around the city, with another 11 miles of spur trail that tie in to neighborhoods and parks. While not precisely a circle—it was once dubbed the "green ghost" for its shape—the rail-trail at the core of the project comprises four different inactive freight lines.

"Atlanta has always been a railroad town," says Ryan Gravel, senior urban designer for Perkins+Will, the firm that designed the Eastside Trail. "There were railroads everywhere."

Gravel, whose 1999 master's thesis helped the BeltLine concept take wing, grew up in the suburbs of Atlanta, where he remembers enjoying the sound of the trains at night. For him, the "adventurous quality" of railroads was captivating. A culmination of his experiences exploring the city's old rail corridors, and a trip abroad, where he was inspired by Paris's rail-trail greenbelt known as the Promenade Plantée, planted the seeds for his exposé on reusing Atlanta's ring of freight railroad to meet modern public transportation needs.

"At the end of the 1990s, the idea was emerging that a lot of this industrial land laying fallow could be repurposed for a new way of life," says Gravel, who is now a Board member of the Atlanta BeltLine Partnership, a nonprofit organization that raises awareness and support for the trail.

As a student at the Georgia Institute of Technology, Gravel's thesis focused on utilizing the rail corridor for a new light-rail system. The idea took hold when he sent the proposal to city officials and caught the eye of Cathy Woolard, who immediately championed the idea and pushed it forward when she became president of the Atlanta City Council. This spring, the long-awaited first phase of the Atlanta Streetcar will open downtown, just five blocks from the Eastside Trail. Future expansion is planned to connect the streetcar with the BeltLine. The trail and active rail line will form a parallel loop around the city in what is known as a rail-with-trail.

More than two decades ago, when Marianne Fowler—then new to Rails-to-Trails Conservancy (now senior VP of federal relations)—was tasked with visiting Atlanta to survey the city's aging railroad corridor for potential conversion to rail-trail, she was "astounded by what a connector it was."

Seeing the startling potential of the city's ring of railroads that were likely to soon be abandoned, she wrote in her 1991 report, "As Atlanta surveys its sobering lack of open space and its diminished prospects for linear greenways, the 20 miles of rail line circling downtown gain significance… To encircle a major American city with a combined 20-mile rail rotary and rail-trail park would be a feat of extraordinary vision and brilliant engineering."

Today, such a feat is becoming reality. To provide people with a peek at the trail's progress, the Atlanta BeltLine Partnership offers free, narrated bus tours of the developing trail on Friday and Saturday mornings, and the Atlanta Bicycle Coalition leads guided bicycle tours on the weekends.

"In the beginning, we were selling air, we had nothing to show," says Harrop. "So we started giving three-hour tours that zigzag around the proposed BeltLine. The tours are so popular now, they book up within a couple of hours."

Not only is the BeltLine itself a recreational amenity, it's spurring the development of new parks and improvements to existing parks throughout the city. The trail's open segments already link to several of these parks, and more are on the way. In 2004, the Trust for Public Land commissioned an urban planner at Yale University to address the need for more park acreage in the city and investigate opportunities for green space along the BeltLine.

"Alexander Garvin took Ryan's thesis and added to it," says Soper. "He added nodes of parks so the BeltLine would be more than just a rail-trail loop. It's helping Atlanta move up the list of world-class cities as far as parks are concerned."

After the study's publication, the Trust for Public Land began acquiring land for the parks outlined in the report. The first major city park built on the BeltLine was completed in 2012. "Historic Fourth Ward Park is built on what was a dilapidated, run-down area," says Soper. "Now that neighborhood is booming. It's ground zero for the economic recovery in Atlanta."

Harrop agrees, "You walk down the Eastside Trail, and there's so much construction it's unreal. There's been $1.1 billion in private investment along the trail: a 3-to-1 return on investment."

Gravel lives along the Eastside Trail and could not be happier with all the growth stemming from the trail. "When we're out on the trail, there are always mobs of people. The BeltLine is changing the way that people live in a really profound way."

Another emerald on the trail's necklace will be Westside Reservoir Park, estimated to open within the next five years on the northwest stretch of the BeltLine. At 300 acres, it will be the city's largest park. The site—due to its towering granite walls nearly 450 feet high, the remnants of a quarry more than a century old—was used for the filming of the second Hunger Games movie. And like that film's revolution, the BeltLine and the revitalization of Atlanta that it brings are truly "catching fire."

Start point/end point: The Atlanta BeltLine will form a loop around the city from Lindbergh Drive in the north to Lee Street in the south, and from Marietta Boulevard in the west to DeKalb Avenue in the east.

Getting there: The Hartsfield-Jackson Atlanta International Airport (6000 N Terminal Parkway) is located in southwestern Atlanta, about 10 miles from completed portions of the Atlanta BeltLine.

Amtrak's Peachtree Station (1688 Peachtree Street, NW) is located close to two segments of the Atlanta BeltLine: a mile from the Northside Trail and two miles from the Eastside Trail. Atlanta is a stop on Amtrak's Crescent line from New Orleans to New York.

Access and parking: As the Atlanta BeltLine connects several parks throughout the city, parking can be found in and around these parks, such as Piedmont Park (400 Park Drive NE) for the Eastside Trail, Rose Circle Park (982 Rose Circle SW) for the West End Trail, and Tanyard Creek Park (460 Collier Road NW) for the Northside Trail.