Today’s Supreme Court ruling is disappointing news for Rails-to-Trails Conservancy, rail-trail advocates and trail users around the country. The full opinion, which reverses and remands a lower court ruling, can be read at http://www.supremecourt.gov/opinions/13pdf/12-1173_nlio.pdf.

At issue in Marvin M. Brandt Revocable Trust et al. v. United States was whether the federal government retains a reversionary interest in railroad rights-of-way that were created by the General Railroad Right-of-Way Act of 1875, after the cessation of railroad activity on the corridor. In today’s 8-to-1 decision, the justices ruled in favor of Marvin Brandt, the Wyoming landowner whose property is crossed by one of these former rail corridors that is part of the Medicine Bow Rail Trail.

It is our belief that the original intent of the 1875 legislation was that these linear public spaces should remain of, and for, the people. Just like our national parks, these former rail corridors are public assets in which we all share and benefit. These federally granted rights-of-way have played a key role in the nation's rail-trail movement, which has built thousands of miles of hiking, biking, equestrian, skiing and snowmobile pathways across America over the past 25 years. 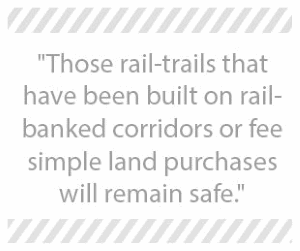 There are hundreds of federally granted rights-of-way corridors across the country, many of which have been converted into publicly accessible trails. This erosion of protections for these public lands in the Supreme Court not only may block the completion of the Medicine Bow Rail Trail through the former rail corridor, but also threatens existing rail-trails, mainly in the West, that utilize federally granted rights-of-way and are not railbanked.

Our legal team is taking a closer look at the decision—and its implications for other rail-trails—to determine next steps. This decision is likely to result in more litigation over rail-trails in federally granted rights of way. Those rail-trails that have been built on railbanked corridors or fee simple land purchases will remain safe. Railbanked corridors are preserved for future rail use by being converted to a trail in the interim.

The fight for these rail corridors is not over yet. The case of Marvin M. Brandt Revocable Trust et al. v. United States will be sent back to a lower court where we hope to have another opportunity to clarify and limit the scope of this Supreme Court ruling. More information in the coming days can be found on our website athttp://www.railstotrails.org/SupremeCourt.

Please contact Amy Kapp at amy@railstotrails.org if you would like more information about the Supreme Court ruling.