This October, we featured a number of the great trails, projects and organizations in the state of New Jersey. We also asked the locals to tell us which were their favorite New Jersey trails. From the northern boundary to Cape May, and from the highlands to the shore, New Jersey has so many great trails. It wasn't easy to choose only 10!

Looking back on New Jersey month, RTC brings you the Top 10 Trails in the Garden State! 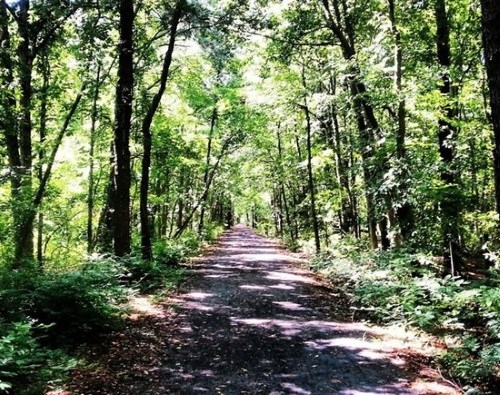 This gem along the Shore is not completely finished, but the segments that are open showcase the best of New Jersey. In the spring, fields of brightly colored wildflowers frame the trail. During the summer months, check out the wildlife refuge and the creatures who call it home.

It's clear why the Columbia Trail was featured as October 2014's Trail of the Month! From forest to farmland, this trail is a magnificent natural history lesson. One notable highlight is the magnificent Ken Lockwood Gorge, where steep slopes and rapid water reveal dramatic rock formations.

Often referred to as the D&R Canal, this trail follows the towpath of the canal, which was built in the early 1830s as a transportation corridor between Philadelphia and New York. Along the 68-mile long route you'll find 19th-century bridges, remnants of locks, and cobblestone spillways.

The Edgar Felix Memorial Bikeway packs enough history, scenery and activity in its 5.2 miles for an all-day adventure. In 2006, the trail became the first dedicated segment of the 55-mile Capital to Coast multi-use trail that will span New Jersey!

Trail enthusiasts in New Jersey adore the Henry Hudson Trail. Some sections are wooded and shady; other sections pass through open fields and across brooks and streams. Bring binoculars and keep a lookout for wildlife, including the many species of birds that live along the corridor.

The Middle Township Bike Path runs for four miles, following an abandoned railroad bed, between Cape May County Park and the community of Whitesboro. Along the way, trail-goers can access the park zoo, Atlantic Cape Community College, Davies Sports Complex, and the 4-H Fairgrounds.

For a dose of rural scenery, head to the northwest corner of New Jersey to the Paulinskill Valley Trail. Farms line the 27-mile corridor, and depending on the season, you are likely to be in the company of equestrians and bicyclists, or snowshoers and dog sled teams!

This is a true community trail: four small cities are tied together by this 6.5-mile corridor that travels through residential neighborhoods and connects the schools, parks and playing fields in between. A few short wooded sections provide a change of pace.

The multi-use pathway spanning the length of New Jersey's Sandy Hook peninsula offers beautiful views of the ocean, as well as shady sections through maritime forest. A bird observatory and wildlife observation decks along the way allow you to take in the natural surroundings.

The 20-mile Sussex Branch Trail, which was RTC's Trail of the Month in January 2011, got its start in the late 1840s as the narrow-gauge, mule-drawn Sussex Mine Railroad, whose primary purpose was hauling iron ore from the mines to the Morris Canal.