If you live in Florida, later this year you have the chance to take a vote on something that will, without doubt, change the state forever.

If passed, the Florida Water, Land and Legacy Conservation Amendment (Amendment 1) would provide upwards of $16 billion over 20 years for the protection and restoration of environmentally sensitive lands and water resources. This funding could be used in many instances to build and maintain trails.

Oh the things we could do! 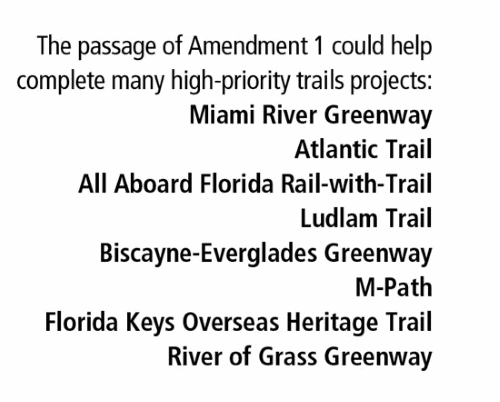 The passage of Amendment 1 could help complete many high-priority trails projects, including the Miami River Greenway, the Atlantic Trail, the All Aboard Florida Rail-with-Trail, the Ludlam Trail, the Biscayne-Everglades Greenway, the M-Path, the Florida Keys Overseas Heritage Trail and the River of Grass Greenway.

If you are a supporter of any of these projects, you have a strong motivation to vote for Amendment 1 on the Nov. 4, 2014 ballot.

But where will the money come from?

Amendment 1 requires no new taxes. Instead, it calls for one-third of the current "documentary stamp" tax paid on real estate transactions to be set aside for conservation measures.

Amendment 1 would re-establish and commit that funding source.

We think investing in Florida's beautiful but fragile environment makes great sense for a number of reasons: tourism, the health and well-being of residents, the education of our children and, first and foremost, the ecological sustainability of this planet.

If you want to learn more about how you can support this great initiative, sign up to RTC's Florida Campaign, and you'll be on the list for all breaking developments from us regarding Amendment 1.