This blog was first published on Aug. 18, 2015, and has been updated for our 2016 Share the Trail Campaign. Be the best you can be on America's pathways, and pledge to Share the Trail today!

So can you guess which of RTC's six Golden Rules for trails is the most universal? Amazingly, it has to do with what you do off the trail. 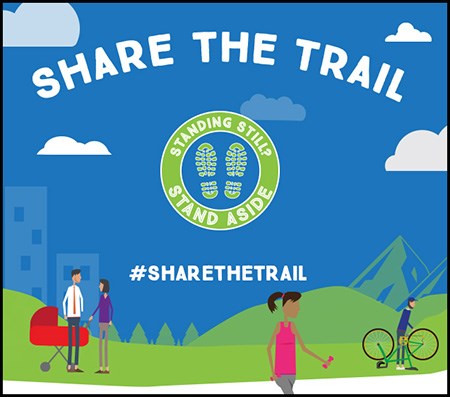 We checked in with four individuals across the country to see what they had to say about scooting off the trail when stopped. From north to south, east to west, Americans agree: If you’re standing still, stand aside.

Karen Stevenson, a mom of two from Milwaukee, Wisconsin, says that when she rides the trail with her young kids, she scoots her family to the side when they stop. “We take a lot of breaks,” she says. “And my girls know to get over to the side when we’re stopped. We make sure all the bikes, toys and snacks are out of the way.” Stevenson says that she’s watched near collisions happen when folks stop but don’t clear the path, and with kids in tow, she knows that it’s her responsibility to not block the flow of trail traffic.

Down in Texas, Jessica Romigh, Founder of the Hutto, Texas-based bike advocacy organization, Bike Hutto, has her own words of wisdom about standing off the trail. For Romigh, it all boils down to safety. “Most trails only have enough space to accommodate two directions of traffic at best,” she says. “When you stand aside, you’re not just practicing good trail etiquette, you’re making the trail safer to both you and the other people using the trail.”

On the East Coast, the understanding is the same. When you’re stopped, stand aside. Sherri Joyner, bike enthusiast and trail user in the District of Columbia feels pretty strongly about stepping aside when stopped. “Seriously, blocking the flow is not cool,” she says. “It’s a safety issue, simple as that.”

In the Pacific Northwest, trail users are trying to set a good example by stepping aside when they’re stopped. Bike commuter Clark Richards from Seattle says that your good etiquette doesn’t go overlooked. “People are really appreciative when you step off the pathway,” Richard says. “It’s easy to forget to do, but it’s really important.”

Join your fellow etiquette champions on the trail, and set a great example!