RTC recently completed a study that could help spur development of a new shared-use path in Northeast Washington, D.C., along the New York Avenue corridor. The trail would create a safer, more accessible east-west bicycle and pedestrian connection in this section of the city.

“New York Avenue will connect these growing areas and will connect a part of the city lacking in these facilities,” says Kelly Pack, trail development director at RTC. 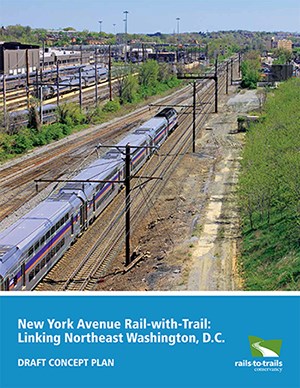 Specifically, the proposed corridor would connect NoMa, an area north of Massachusetts Avenue and east of Union Station, to the U.S. National Arboretum, a beautiful botanical garden on 446 acres with both indoor and outdoor exhibits.

The concept of developing a trail along the New York Avenue corridor dates back at least a decade, when it was included in the District’s 2005 Bicycle Master Plan. Increased development on the west and east ends of the trail, however, renewed interest in the corridor and its potential for trail development. New residential and retail development emerging in Northeast Washington, D.C., will bring thousands of people to and through its neighborhoods, but traffic conditions on New York Avenue—a major city arterial—make it unsafe and unpleasant to walk or bike.

“This area has poor transportation options in general,” says Pack. “And as we’ve seen with the increasing popularity of the nearby Met Branch Trail, people want these facilities.”

At this point, the report is a draft concept plan. The report lays out the preferred alignment for the trail and identified opportunities and challenges; more planning—including community input—will be needed before trail development can occur.

According to Pack, the trail likely will be developed in phases, which, optimistically, could take five years. Some sections could be done in the next year or two, which could propel the next legs of the trail.

In addition, Douglas Development is in the process of transforming a key space along the trail—including the old Hecht’s Warehouse building, a local landmark—into a mixed-use area, which could be connected to downtown via the New York Avenue corridor, with the popular Union Market as an anchor. Douglas plans to continue supporting the development of the trail.

RELATED: Transforming Chattanooga: How Rail-with-Trail Is Shaping the City's Future

“Trails are increasingly seen as valuable—by residents, developers and city officials,” says Pack. “These connections, both to transit and to other trails, are incredibly important.”

Improving bicycle and pedestrian facilities along the New York Avenue corridor is key to advancing the city’s goals of increased mobility and enhanced connectivity between and through Northeast Washington, D.C. Further exploration of concepts presented in the study could help to move forward a project that has remained in the planning stages for many years one step closer to reality.

To view the full report, please visit the New York Ave. rail-with-trail report in our Resource Library, or you can download the three-page summary.

Demand for Trails District Of Columbia RTC in Action