This article by Evan Bevins originally ran in the Parkersburg News and Sentinel on June 23, 2016. It has been reposted here by permission.

PARKERSBURG - Nearly 130 bicyclists ranging in age from 7 to 77 rode into the city Wednesday to conclude the Rails-to-Trails Conservancy's 2016 West Virginia Sojourn.

The group left Sunday from the Point Park Marketplace and made their way to the North Bend Rail Trail, following it through North Bend State Park to Salem in Harrison County, before returning to Parkersburg. The goal was to highlight the existing trails and the need to upgrade or connect them to draw even more cycling enthusiasts in the future.

Of the 129 bicyclists participating, only one was from West Virginia, said Liz Sewell, trail development manager, Northeast Region, Rails-to-Trails Conservancy.

For Lake Oswego, Ore., resident George Watson, the ride was an opportunity to reach a goal.

Watson and his wife, Stephanie, met up with his sister-in-law, Tammy Watson, and her daughter, Kristina, from Richmond, Va. Tammy Watson said she's driven through West Virginia before but never really visited.

"This is an absolutely beautiful state, one of those hidden gems," she said.

George and Stephanie Watson planned to spend the rest of the week in the Mountain State, looking for Fenton Art Glass items and traveling in the Northern Panhandle.

The tunnels along the trail were popular features for many riders, whether for their atmosphere and history or the respite from the heat they provided.

"The tunnels were awesome. I thought they were so cool," said New Jersey resident Tom Heerema.

Riders said they enjoyed the history of the area that was provided in the evenings and the hospitality of residents and businesses in places like Cairo, Pennsboro and West Union along the way.

"They're so friendly and engaging and hospitable," Sewell said.

Kristina Watson, 10, listed the big downhill stretch near Happy Valley Road at the North Bend trailhead as her favorite part of the ride—until her mother reminded her of the ice cream they had at Shemp's Cafe in Cairo.

Shemp's was glad to welcome more than 100 cyclists on Sunday as well, said Katie Etheredge, the restaurant's co-owner. "Milkshakes seemed to be the order of the day, and floats," she said. "We ran out of root beer soda.

"Any time we get groups of people to come through, it's good for the town," Etheredge added.

The conservancy will track the economic impact of the Sojourn and provide those numbers to local officials. Washington, D.C., resident Steven Seelig said the idea is to encourage people at the state, county and city level to support repairs and connections to other trails.

"This one's got all the bones about being a great trail, and it just needs some tender loving care by the state and the counties and the municipalities," he said.

Seelig said he'd eventually like to see an unbroken trail from Parkersburg on to Clarksburg and Morgantown.

"It's going to bring a lot more folks like us into town who are more than happy to spend our hard-earned dollars," he said.

Some riders reported rough surfaces on the sections of the trail, Sewell said.

Parkersburg's Little Kanawha Connector ends at West Virginia 47 and Mary Street, about four miles from the head of the rail trail at Happy Valley Road near West Virginia University at Parkersburg. Lenhartsville, Pa., resident Pat Rettstadt said she appreciated the police escort through that area on Sunday, the first day of the ride.

"You're on your own, and you're hoping cars whizzing by don't flip you," she said.

Sewell said the turnout was about half of what past Sojourns have drawn, but she attributed that to the Conservancy offering more events this summer than in years past.

Several of the riders said they would consider returning to the area to ride the trail again.

"I'd probably come back here with my oldest son because he would like to do it," Heerema said.

Here are some more photos of this year's Sojourn: 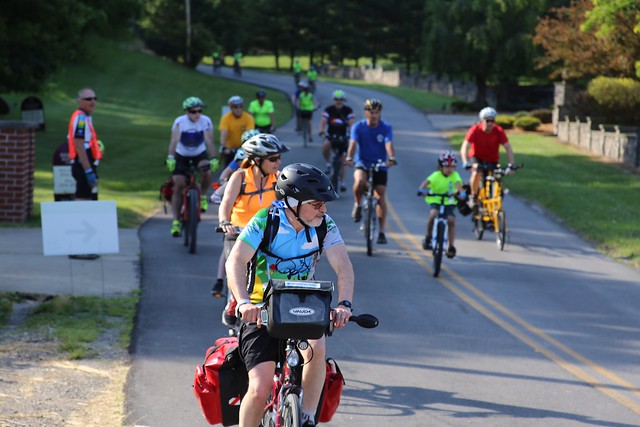