I am a cyclist, and if a bike ride can raise awareness and funds for these people to do the lifesaving work that they are doing—then that’s the role I can play to make a difference.

Eighteen-year-old Jan Gierlach just spent three months bicycling 3,300 miles solo on the Southern Tier Route from San Diego, California, to St. Augustine, Florida—a trip for which he graduated a semester early from high school and raised more than $600,000 for three causes near and dear to his heart. He embarked on this Ride For 3 Reasons to support cancer research, hospice care and ALS research after losing loved ones to lung cancer and Lou Gehrig’s disease, and witnessing the comfort that hospice care provided his grandmother in her final days. The Ride beneficiaries include the Robert H. Lurie Comprehensive Cancer Center of Northwestern University, JourneyCare and the National Hospice Foundation, and the Les Turner ALS Foundation.

We caught up with Jan early in his trip—and just recently upon completion—to discuss his journey, his passion for biking and his three reasons for riding this spring.

RTC: On the Ride For 3 Reasons website, you mentioned hearing founder Bob Lee speak to your third-grade class—and that his talk inspired you to do this ride. Have you been planning your early graduation and this biking trip since that time? 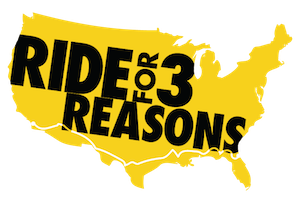 Jan: Bob did three rides starting in 2001 (and then in 2007 and 2012) to circle the perimeter of the U.S. For his 2007 ride, he was doing a speaking circuit and he spoke at my elementary school. I wasn’t a cyclist yet. It was my first encounter hearing someone doing something of this magnitude before. After that, it was in the back of my head for some time, and then in my junior year I got serious about how to make it happen. Bob lived in my home town and was the first person I went to speak with!

I wanted to graduate early to give the trip all the time it needed, so I got serious, got my credits in order and graduated in December 2016.

RTC: What advice did Bob provide—and how long have you been bicycling?

Jan: By the time I met Bob, I was an avid cyclist, but primarily in mountain biking. My father was very active in the sport in the 1990s, and as I was growing up, I never played football and baseball; basically, by the time I was old enough to engage in athletics, it was always cycling. I’ve been competitively mountain biking since the age of 10 or 11.

This was my first bike tour. Bob was a wealth of knowledge on the logistics of doing a trip like this!

RTC: Why are you doing this ride?

Jan: I’m doing it for my personal connection to the three charities, having lost a grandfather to lung cancer and a dear family friend to ALS, and having watched how hospice treatment comforted my grandma before she passed away.

These connections are very personal to me; they’ve given this ride a depth of meaning and purpose, and the strength to keep going on hard days—and there are some hard days out here.

RTC: Why have you chosen bicycling to support these causes?

Jan: I think it comes down to a question of what we as citizens can do when we feel compelled. What gifts and talents do we have? How can we leverage those in a way that will do the most good for others?

For example, I’m not a skilled researcher or physician who has the experience to be in the laboratory making breakthroughs and assisting people that way.

I am a cyclist, and if a bike ride can raise awareness and funds for these people to do the lifesaving work that they are doing—then that’s the role I can play to make a difference.

RTC: How much have you raised so far, and where will the money go?

Jan: To date, we have raised more than $600,000, and 100 percent of those funds will go to the nonprofit organizations; none of that has been diverted in any way to pay for my ride or my trip.

RTC: How did you fund this trip on your own?

Jan: I’m using my savings from four years of working through high school, but you don’t need a huge budget for this trip, which for me is a hybrid of camping and staying in hotels.

I’m camping as much as possible because it’s less expensive, but I will use a motel every now and again. I’m also staying with friends along the way.

RTC: Any observations about the trip so far?

Jan: I think you miss a lot if you don’t stop and look around now and again. Instead of getting from point A to point B as fast as possible, I’m trying to talk to people and enjoy myself and the diverse cultural opportunities as much as I can. I do have mileage goals, but it’s by no means a race.

RTC: Any challenges or barriers you’ve had to overcome? Any pleasant surprises?

Jan: You know, I’ll meet great people and see some great things, and then the next day I’ll go over a hill and blow a tire. The biggest challenges have been wind and hills! But nothing I haven’t anticipated as a cyclist. I have had the gulf stream on my back and some bad headwinds coming through the dessert. But I try and enjoy it all!

A few nights ago, I met a brother and sister who were driving around the southwest where they used to live. They took me out to dinner and breakfast … they were amazing.

I know when it’s all over that I’ll definitely miss life out here on the road.

RTC: Any advice for those who are thinking of a long biking trip?

Jan: Don’t overthink it. If you think about all the details and what can go wrong, you’ll never do it. There’s really no way to fully prepare to do something like this unless you are doing it. Take that leap of faith, and trust yourself.

RELATED: How to Prepare for Your First Long-Distance Trail Ride

After Jan returned from his trip, we asked him how the trip impacted him. Here’s what he had to say!

“Biking long distances nearly every day for the last two and a half months was an affirmation of my love for the sport of cycling. There were certainly days on this trip that pushed the physical boundaries of what I thought I was a capable of, but riding for three charitable causes that are of such personal significance gave me a mental fortitude I would not have had otherwise."

“I will pursue my goals with a greater sense of urgency than ever before. Life is so short; there can be no postponement. It is always now or never."

To read more about Jan’s experience, see photos from his ride and support the beneficiaries, visit the Ride For 3 Reasons website.