At Rails-to-Trails Conservancy (RTC), our team is lucky. We get to experience firsthand the transformative power of trails every day. Through our work, we witness trails strengthening economies, putting people first when it comes to mobility, promoting health and protecting our environment.

Trails really are equalizers that ensure everyone, regardless of their age, ability or socioeconomic background can be physically active, form connections to their communities and reach critical destinations safely on foot or by bike.

By creating regional trail networks that serve as models for the country, advocating for trails at the state level and on Capitol Hill, and innovating the way we think about trail development, we hope to inspire our grassroots community of more than 1 million people—and all of America—to support these vital assets.

As 2017 draws to a close, here’s a look back at just a few of the ways we made a difference for trails this year.

1Rallying for an Epic Trail-in-the-Making in Missouri

This 144-mile mega corridor on the old Rock Island Line from Windsor to Beaufort is not just huge for Missouri, but for trail users across the country. When complete, it will connect to the 237-mile Katy Trail in Windsor and Washington, along with some other spurs and smaller segments, creating a 450-miles-plus loop spanning from Kansas City to St. Louis.

RTC has been involved almost from the get-go; in partnership with local trail advocates and public agencies, we led a massive mobilization effort in 2016 to protect the corridor and promote its transformation into a trail. This summer, the state put the project up for review, and RTC jumped on the opportunity to organize a rally—in partnership with Missouri Rock Island Trail, Inc. (MORIT) and the Missouri Bicycle and Pedestrian Federation—showcasing how much people want the trail and how much value it will bring to the 23 communities along the route.

Additionally, thousands of comments from local citizens in favor of the trail were collected and sent to the Department of Natural Resources, further demonstrating the groundswell of support the trail has throughout the region. A 2011 study found that the Katy Trail generates an estimated $18 million annually in economic impact, with its tunnels, bridges, beautiful landscapes and quaint towns—and residents and business owners along the Rock Island corridor recognize the future trail’s potential as an economic engine.

2Keeping the Bikes Coming for Kids in New Jersey

We love kids, and we have a special place in our heart for the hundreds of kids in Camden who, over the years, have been making an impact in their neighborhoods as youth leaders and watershed trail ambassadors, and learning great biking skills, through our TrailNation™ Circuit Trails youth education and stewardship programs.

In April, we helped organize a special project to give new bikes to an eager group of fifth-to-eighth-graders in the Rutgers-Camden IGNITE after school cycling program. Their old ones (provided in 2008 through RTC’s Metropolitan Grants Program) were ready to be recycled after seeing nearly 18,000 miles of use by hundreds of kids. It was definitely time for a replacement!

After a brief test ride and coaching session led by IGNITE Instructor George Wood, the students (from Holy Name and Cooper’s Poynt Family School) were off and biking on the Camden GreenWay and other trails that help make up the 750-mile Circuit Trails network. (Special thanks to Advanced Sports International and local bike shop Danzeisen & Quigley for their support.)

Through the Baltimore Greenway Trails Coalition, an RTC TrailNation project, we’re working with local and national partners to create a 35-mile urban trail network that will bring walking and biking access to many long-underserved neighborhoods in the city.

In the Mondawmin Neighborhood, for example, we’re working with local residents to help promote and create safe crossings. For example, in partnership with New Public Sites, we hosted Mondawmin Crossings, a walking tour in which participants heard from local residents and community leaders about the history of the neighborhood and the exciting future plans to create a network of public spaces, parks, housing, education and transit.

Recently, RTC applied our BikeAble tool in Milwaukee to explore how trails could improve connectivity in the city’s most underserved neighborhoods. What we found was really inspiring: Investing in just two projects has the potential to provide trail access to more than 175,000 additional residents—creating new active transportation opportunities for entire segments of the city that have previously been isolated without cars, and without safe walking and biking networks.

Milwaukee is doing well overall—with exceptional trails like the Hank Aaron and Oak Leaf supporting a healthy biking culture—but for neighborhoods experiencing inequality, there is a disproportionate lack of access to walking and biking facilities (with only 8 percent of residents within biking distance of a trail, and just 3 percent within walking distance).

5State Advocacy = Hundreds of Millions of Dollars for Trails

This past year, we ramped up our advocacy and support for statewide trail programs in collaboration with local partners all over the country, and these efforts helped generate approximately $368 million for trails!

In states where we were actively involved, we helped secure more than $100 million in new recurring state-level funds—including for California and Utah, and an additional $238 million in new, one-time funds for trails and active transportation projects in New York and Florida.

Specifically in Florida, we helped contribute to the renewal of more than $28 million in trail funds that will go toward completing major trail networks such as the SUN Trail Network and the Miami LOOP, an RTC TrailNation project that will one day cover a 225-mile route through Miami-Dade County.

Starting in 2016, RTC teamed up with San Francisco Bay Area-based Rich City Rides to lead “Richmond Rides! Bikes, Buses, BART and Breathing!”—a series of community programs designed to foster more walking, biking and transit use in an effort to reduce air pollution and improve personal and community health in the region. Supported by the Bay Area Air Quality Management District and led by RTC along with Najari Smith of Rich City Rides, the events ranged from group rides and instructional sessions on bike safety, repair and mass transit to team biking challenges.

Underscoring the way in which trails impact communities, the 2-mile Richmond Greenway—which opened in 2007 through efforts by RTC and local partners—served as a great launching point for many of the 16 events implemented in 2016 and 2017. And we definitely made an impact: Overall, the program reached more than 51,000 people; and through our team challenge, we covered 2,446 miles by bike and saved an estimated 3,593 pounds of C02 emissions. Check out a video recap above. 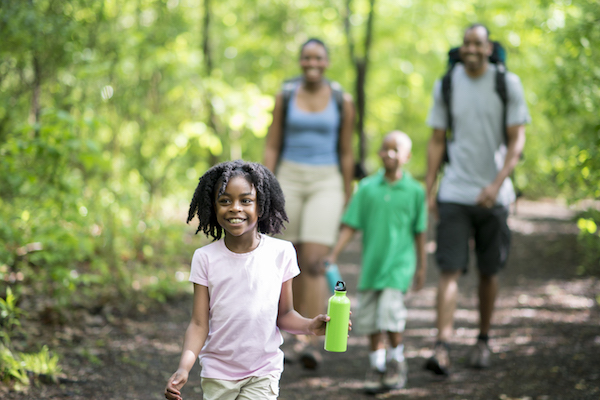 Want to support our work?

With so much great inspiration to motivate us, we are really looking forward to upping the game in 2018. Stay tuned for more on our plans!