"The trail system provides a way to see the county in an up close and personal way ... I love living here because of it. It makes it such a better place to live."

True to its name, within minutes, travelers on the MKT Nature and Fitness Trail are spirited away from lively downtown Columbia, Mo., and taken into the forest. Although the city is so close at hand, it's forgotten in the company of wild turkeys, deer and a flash of orange as a fox darts across the path. The trail—just a tad shy of nine miles—is serene with the soft crunch of feet on crushed stone, the rustle of leaves overhead and the gentle gurgle of its many creek crossings.

"I love the tree canopy," says Janet Godon, outreach coordinator for the Columbia Parks and Recreation Department, who rides the MKT Trail every day to work. "It could be 100 degrees out, but you get on the trail and you don't feel it. It's a backyard gem for the city." 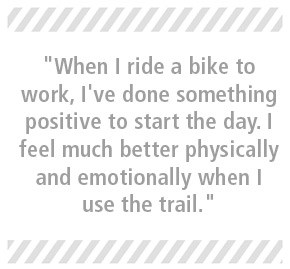 Mike Griggs, director for the Parks and Recreation Department, uses the trail often, too. "When I commute in my car, I get stuck in traffic and I feel frazzled by the time I get to work. When I ride a bike to work, I've done something positive to start the day. I feel much better physically and emotionally when I use the trail."

Columbia—affectionately called CoMo by locals—is a college town, home to the University of Missouri, the largest university in the state (famed alumni include Brad Pitt and Sheryl Crow). Before the trail's dive into nature, it hugs the west end of the campus, and when the fall semester begins, this part of the trail will be transformed with all the vibrancy and activity of its youthful neighbors.

MU's campus is itself a beauty and worth a side trip; its entire grounds are a designated botanical garden. And, only blocks from the trail, the school's oldest section—the Francis Quadrangle, or more commonly just "The Quad"—is listed on the National Register of Historic Places. Its cluster of dusky red brick buildings and an unusual set of towering, roofless columns (the remains of a burnt down building) date back to the late 1800s.

In fact, the rail line on which the MKT Trail was built—a spur of the Missouri-Kansas-Texas (MKT) Railroad—was created in part to service students and faculty at MU, a 175-year-old institution and the first public university west of the Mississippi River.

A nod to this railroad history is anticipated to be ready next spring. Jay Dix Station, a county-owned but city-managed park that the MKT Trail runs through, is currently under renovation. Plans for the 30-acre site include a train-themed playground and shelter, and a refurbished caboose.

But the trail's southern end is its pièce de résistance. Here, it directly ties into the Katy Trail State Park, one of the longest rail-trails in the country at 238 miles, which nearly traverses the state from border to border. People doing the long haul can conveniently come into town for refreshments or to spend the night. The point where the two trails meet is Hindman Junction, named in honor of a key trail advocate and five-time mayor of Columbia, Darwin Hindman.

"The MKT Trail's connection to the Katy Trail draws people into Columbia that otherwise wouldn't have seen it," says Janet Thompson, northern (District II) commissioner for Boone County. "It's a lovely segue into our community and provides a really great impression of the city. It's not just an exit ramp."

Incredibly, this trail network could potentially get even better; late last month came the surprising news that a 145-mile segment of inactive rail corridor, which crosses the Katy Trail in Windsor, was going up for bid. Seeing the potential for conversion to a rail-trail, Rails-to-Trails Conservancy (RTC) put in an offer to purchase the corridor, but won't know for a few weeks yet if it will be accepted.

In Columbia itself, trails are thriving thanks in part to funding the city received through the federal Nonmotorized Transportation Pilot Program (NTPP). Launched in 2005, the federal government gave four communities across the country, including Columbia, dedicated funding to invest in walking and biking infrastructure and to measure any resulting changes in transportation behaviors. RTC is one of three managing partners and was involved in the program's design and inception.

"We received a $22 million federal grant, of which $6 million was dedicated for trails," says Griggs. "Trails are still being built with the [NTPP] funding. Some of the money is being used to build spokes off of the MKT Trail. It's allowing us to build those connections to where people eat, play, work and are entertained."

Locally, the federal program was managed by GetAbout Columbia, and the funding generated more than 125 miles of new on-road bike lanes, multi-use trails, sidewalks and bicycle boulevards in the city, as well as hundreds of new bicycle parking spots.

Griggs, who has lived in Columbia all his life, is excited by the new developments. "We're working on a lot more things to take us to the next level," he says. "If you're going to downtown or to the University of Missouri, we have trails that will get you there. Connecting those trails to more shopping centers and neighborhoods—that's our next step."

The granddaddy of these new paths, the MKT Trail, has been around since 1982. "Columbia is building on investments made previously," says Marianne Fowler, RTC's senior strategist for policy advocacy, referring to this longtime showpiece of the community. "Rail-trails have truly forged the movement for active transportation."

Like a piece of a puzzle, the MKT Trail is fitting into a planned 30-mile trail loop around the city. "The loop is our long-range plan; we're slowly adding segments to it," says Griggs. "A lot of land is already set aside for it; we just have to find the money to develop it. We'll probably be able to get it done in the next 10 or 15 years."

Much of the loop, like the portion along the MKT Trail, is already completed. "We think of it as a wheel and it has spokes that come in to central Columbia," says Godon. "The southern and the northern portions of the loop are built, so we're filling in the east and west sides."

In 2013, the Show Me State was named "Best Trails State" by the nonprofit American Trails, and with all these exciting trail projects newly completed or underway, it's certainly showing the country that it has earned it.

"The trail system provides a way to see the county in an up close and personal way," says Thompson, who has walked both the MKT Trail and the Katy Trail with her friends. "I love living here because of it. It makes it such a better place to live."

Getting there: The Columbia Regional Airport (11300 South Airport Drive) lies on the southeast side of the city, about 15 miles from the trail.