In Illinois, the preferred route of the Great American Rail-Trail is poised to stretch across the northern part of the state from the Chicago metropolitan area to the Mississippi River.

Existing trails that host a majority of the route include the Hennepin Canal Parkway, which still contains many of the old locks and aqueducts from its namesake, the early-20th-century Hennepin Canal, and the Illinois & Michigan Canal State Park Trail, which traverses the I&M Canal National Heritage Corridor, designated in 1984 as the first National Heritage Area in the United States. Toward the end of the Great American route in Illinois, the Great River Trail features the river communities along the mighty Mississippi—including the Quad Cities of East Moline and Rock Island.

The Great River Trail spans over 60 miles of Illinois terrain alongside the Mississippi River, taking trail users past various historical sites, including two Native American landmarks, on its way from Savanna to Rock Island. About midway along the trail, you’ll find the Albany Indian Mounds State Historic Site, a burial site for a Native American group named the Hopewell after an Ohio town where similar mounds have been discovered. The Hopewell died out around 350 A.D., and little is known about them.

Near the south end of the trail in Rock Island, the Black Hawk State Historic Site commemorates the Sauk and Meskwaki people. The site is built atop the former Sauk village of Saukenuk, where Black Hawk, a band leader and warrior of the Sauk, was born. Black Hawk spent much of his life fighting for his tribe and his home, joining alongside the British during the War of 1812 and leading about 1,500 followers in the deadly Black Hawk War of 1832. At the historic site, visitors can view tribal artifacts and exhibits, as well as a to-scale model of the city that Black Hawk fought so many battles for. Read about more historical connections along the Great American Rail-Trail here.

The “Great American” Route Through Illinois 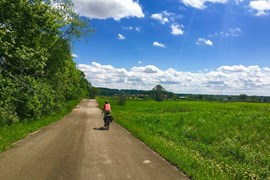 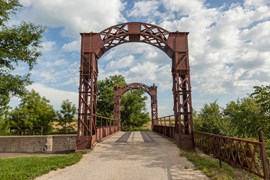 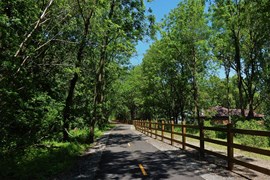 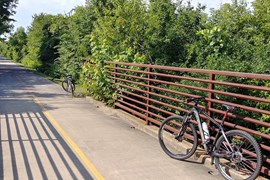 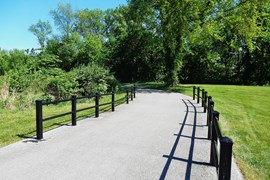 Boasting more than 100 miles of trail, the Hennepin Canal Parkway parallels the early-20th-century canal along which visitors will see many of the old locks and aqueducts. From the Illinois River in the east to the Rock River (and almost the Iowa border) in the west, the pathway offers passage through the varied terrain of northwestern Illinois, including forests, grasslands, marshes and farmland.

RTC will advocate for use of unobligated federal funding for trails, including funds from the Transportation Alternatives Program and the Recreational Trails Program, to meet development needs along the preferred route of the Great American. Special emphasis will be placed on the maintenance and capital improvement needs of the Hennepin Canal Parkway, one of the Great American gateway trails.