The first state in the nation to put the Railbanking Act of 1983 to use, Iowa has a long history of leadership in trail development. Its rich network of trails includes well-established pathways such as the picturesque Cedar Valley Nature Trail—one of the state’s first rail-trail conversions and the state’s Great American gateway trail—and the nationally renowned High Trestle Trail with its famous mine-shaft-themed art installation. These trails will join with dozens of other trails to create a 465-miles-plus route from Davenport to Council Bluffs.

Iowa is rich in railroad and western trail history, with Council Bluffs having served as the eastern terminus for the first transcontinental railroad and a stop along the 1804–1806 Corps of Discovery Expedition—now the headquarters for the 3,700-mile Lewis and Clark National Historic Trail.

The “Great American” Route Through Iowa 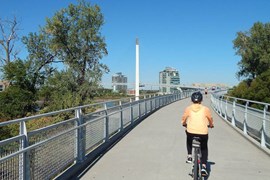 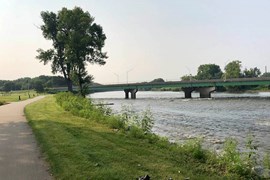 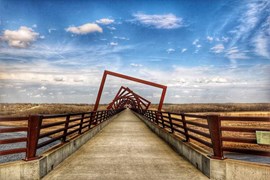 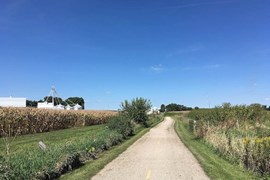 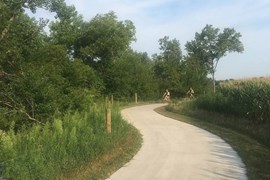 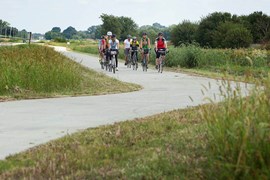 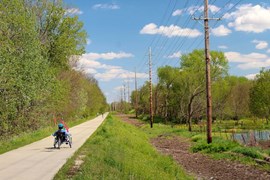 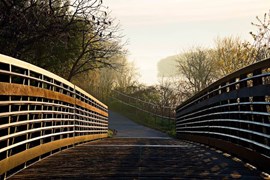 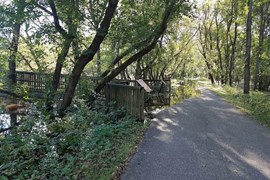 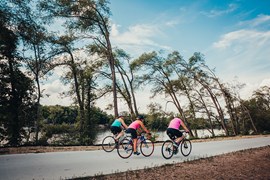 Experience America’s Heartland up close on the Cedar Valley Nature Trail through eastern Iowa. The 52-mile pathway, one of the first rail-trail conversions in the state, follows the beautiful Cedar River through agricultural fields and scenic swaths of prairie and wildflowers, while also connecting the urban centers of Waterloo, Cedar Falls and Cedar Rapids.

Council Bluffs draws its name from trailblazers Meriwether Lewis and William Clark, who reached the area in late July of 1804. There, they held the first meetings between U.S. officials and chiefs of the Oto and Missouri tribes. Clark named the meeting place, in present-day Fort Calhoun, Nebraska, “Council Bluff.”

Just up the Missouri River in Iowa, Council Bluffs took the name and ran with it. Information about the Lewis and Clark expedition, as well as the Oregon, California and Mormon Trails, abounds at the Western Historic Trails Center, which also serves as the southern starting point of the Iowa Riverfront Trail. The 7-mile trail runs alongside the Missouri River, past city parks and the Blackbird Marsh County Preserve. It also offers a connection to the Bob Kerrey Pedestrian Bridge, which spans the Missouri. Not far from the trail’s northern endpoint, in the Loess Hills, visitors can take in a sweeping view of the West from the scenic outlook at the Lewis and Clark Monument. Read about more historical connections along the Great American Rail-Trail here.

RTC will continue to support statewide advocacy efforts seeking to renew existing state trail funding as well as to create a $20 million annual state investment in trails via the Outdoor Recreation Trust Fund. During the 2020 legislative session, RTC will work with the Iowa Natural Heritage Foundation and the Iowa Bicycle Coalition in pursuit of these goals. In addition, RTC will work to ensure allocation of federal Transportation Enhancement funds toward Great American Rail-Trail priorities.