The preferred route of the Great American Rail-Trail will travel through the northern panhandle of West Virginia and the town of Weirton, along the Ohio River. While it's the state with the fewest miles of the Great American Rail-Trail, the connection it provides is critical—both for its intersection with other developing trail networks and its historical and regional significance. The state’s Great American gateway trail and sole host trail, the Panhandle Trail is also a key part of the Cleveland-to-Pittsburgh corridor of the Industrial Heartland Trails Coalition—one of RTC’s TrailNation™ projects, which seeks to establish the former industrial heartland into a world-class trail destination and will connect Pennsylvania, Ohio, West Virginia and New York via a developing 1,500-mile trail network.

About 5 miles north of the western endpoint of the 29-mile Panhandle Trail, you’ll find a vestige of the Industrial Age. Weirton, West Virginia, is home to the first iron furnace constructed west of the Allegheny Mountains. The Peter Tarr Furnace, now a historical landmark, produced about two tons of iron a day during the early 1800s. The furnace deteriorated over time before it was rebuilt with onsite materials in 1968. It now borders Kings Creek, an Ohio River tributary. Read about more historical connections along the Great American Rail-Trail here. 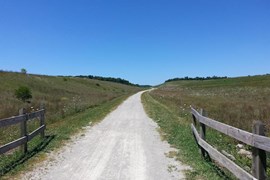 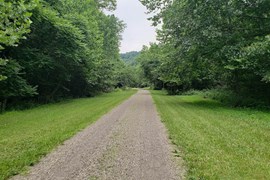 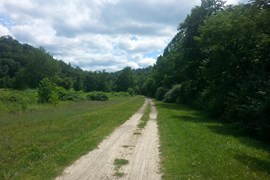 From just outside of Pittsburgh, the Panhandle Trail heads west, slipping over the border into the northern tip of West Virginia, serving as a literal gateway between the two states. Running adjacent to creeks for much of its 29 miles, the Panhandle carries walkers and bicyclists over many small bridges as it cuts through the rolling and, by turns, rocky hillside.

RTC will work with local partners—the Northern West Virginia Brownfields Assistance Center and the City of Weirton—to engage stakeholders in finalizing preferred route options for the trail gap. Activities will include surveying, right-of-way and land transfer negotiations, cost estimation, design and engineering, railroad engagement, funding strategy, construction assistance and bridge rehabilitation. The work will be implemented as part of RTC’s Cleveland to Pittsburgh Feasibility Study, scheduled for release in Fall 2019 and defining trail development strategy for a key corridor of the Industrial Heartland Trails Coalition, a developing 1,500-miles-plus TrailNation™ project that seeks to create a world-class trail network between Pennsylvania, West Virginia, Ohio and New York.