A dozen trails will host the preferred route of the Great American Rail-Trail in Indiana—which will take a diagonal trajectory across the state from Richmond to the Chicago metropolitan area. The route is hosted by well-loved trails such as the Cardinal Greenway, which connects the eastern side of the state to urban Muncie and Marion, and the Nickel Plate Trail—which features the famous bucolic corn-belt landscapes the Hoosier State is known for.

When RTC met with officials from the Indiana Department of Transportation to discuss possible routing options in the state, they were so excited about the potential of the Great American Rail-Trail that they asked RTC to consider including as many trail miles as possible in Indiana. In 2018, Indiana Gov. Eric Holcomb announced the state’s Next Level Connections program, a $1 billion investment in infrastructure projects including trails, which is proving to be important to completing a trail across Indiana.

The “Great American” Route Through Indiana

RTC’s route analysis defines the preferred route of the Great American Rail-Trail through Indiana as 220 miles and just more than 50% complete—comprising nearly 119 existing trail miles and 96 gap miles. The Great American will be hosted by nine existing trails through the state. Click the links below to view full trail descriptions on TrailLink.com.

Live from Muncie, Indiana, along the Cardinal Greenway 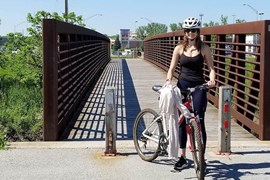 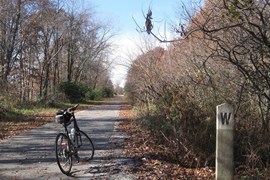 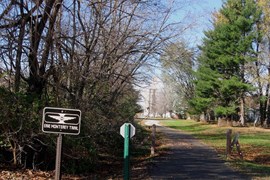 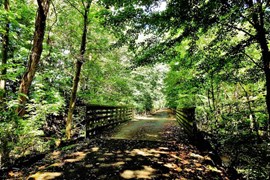 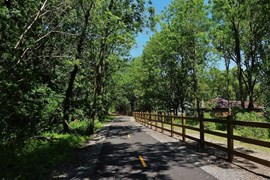 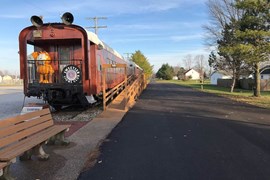 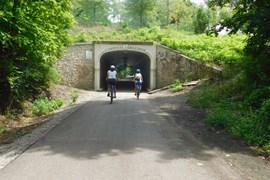 The Cardinal Greenway is the longest rail-trail in Indiana and an adventure not to be missed with picturesque rural landscapes, fields of wildflowers, a gorgeously restored depot, several bridges, charming small towns—and a history steeped in the American Jazz Age.

In the 1920s, Gennett Records recorded some of the first notes that jazz legends Louis Armstrong, Duke Ellington and Bix Beiderbecke ever laid down. The little label housed in the brick Starr Piano Company building in Richmond, Indiana, opened its doors to a world of musicians. That included the pairing of “Jelly Roll” Morton with the New Orleans River Kings, the first interracial recording session in American music history. Though many influential jazz artists started something big at Gennett, the label recorded anything that might sell, including the sounds of the trains passing by. In addition to jazz, blues, gospel, country and oration offerings, Gennett recorded some of the first sound effects records. Titles included “Hog Calling Contest” and “Railroad Comes Through the Middle of the House.”

Where the railroad once was, the Cardinal Greenway now passes by the preserved remains of the Starr building. Starting north near Marion, the rail-trail travels 61 miles through Muncie to Richmond, where jazz luminaries took some of their first career steps. Read about more historical connections along the Great American Rail-Trail here.

RTC will work with local partners—Preble Trails, Five Rivers Metroparks, the City of Richmond and Preble County Park District—to provide the expertise and resources necessary to complete the combined 31.8-mile trail gap. Activities will include identifying local match funding for the Wolf Creek Trail Extension and coordinating with Preble County and the City of Richmond on activities including a corridor feasibility study, cost estimation, trail design and engineering, local stakeholder engagement, funding strategy and ultimately construction of the cross-state connector project.