The Baltimore Greenway Trails Network is a vision for a 35-mile world-class network of urban trails that will link together the diverse neighborhoods, cultural amenities and outdoor resources that make up the landscape of Baltimore City.

When complete, the trail network will connect the city’s popular institutions and destinations—including universities, hospitals, museums, parks, schools, waterfronts and employment centers—with Baltimore’s diverse communities. The trail network will transform the public realm by providing equitable, healthy, low-stress access to open space and reliable transportation and recreation for people of all ages and abilities.

The concept for this modern-day trail vision was spearheaded by Rails-to-Trails Conservancy (RTC) along with a coalition of more than 90 partner organizations and is inspired in part by the 1904 Olmsted Plan for Baltimore. Although the historical plan never came to fruition, it aimed to expand public access to the city’s vast amounts of public parkland by developing “green corridors”, envisioned as linear extensions of the city’s park systems that would connect neighborhoods and residents together. Today, we have identified new opportunities to bring this vision to reality thanks to the Baltimore Greenway Trails Network, which will link the city’s neighborhoods with its amenities and attractions to serve all Baltimore residents and visitors.

The study examines the potential economic and social benefits of a $28 million plan to expand and connect existing trails in the city to complete the Baltimore Greenway Trails Network.

This report was prepared by Ernst & Young LLP in cooperation with RTC for the Greater Washington Partnership.

What This Means for Baltimore

Only 10 additional miles are needed to close critical gaps through 75 neighborhoods and help reverse the urban fragmentation prevalent since the 1950s. Former rail lines, industrial coastlines and reconfigured roadways will be transformed from barriers in the built environment to community-based assets centered on trails. This will change the way Baltimore residents work, live and play—and generate myriad long-term impacts related to social equity, health, environmental conservation, active transportation and economic development.

Baltimore has been fragmented by busy roads and a history of housing policies since the early 20th century, as a result of a racist financial and real estate practice known as Redlining. This now illegal discriminatory practice segregated communities based on race and socio-economic status for generations while its impact on neighborhoods and families exists today. These neighborhoods are often isolated from transit, trails and greenways while more than 200,000 (nearly 1 in 3) of city residents are without access to a car. The 35-mile trail loop will connect over 75 of the city’s diverse neighborhoods to the downtown, important institutions and regional economic centers—providing safe walking and biking access to jobs, reliable public transit, schools and outdoor opportunities for physical activity and recreation.

In Baltimore, opportunities for safe access to physical activity are low, while chronic health conditions are high. Creating a more equitable trail network will increase accessibility to Baltimore’s many parks and open spaces for nearby residents—providing more options to be active and connect to nature. For decades, entire neighborhoods have been segregated from public outdoor space and transportation, making it difficult to be physically active outdoors. The completed trail network and the new opportunities it creates for exercise and active transportation will lead to more healthy communities that thrive. The completed trail network is also projected to save Baltimore residents as much as $2.4 million per year in health costs, according to an Ernst & Young LLP report.

The Baltimore Greenway Trails Network is partly based on a vision set forth a century ago to create a parks and greenways system in the city that naturally integrated—and was built upon—the city’s three stream valleys (Gwynns Falls, Jones Falls and Herring Run) and other unique natural features. The trail network will help preserve these cherished assets while also serving as critical green infrastructure that safely transports hundreds of thousands of people to their destinations while lowering Baltimore’s carbon footprint. The Greenway will help Baltimore City and the region reach its goals. This green infrastructure network will provide wildlife habitats and increased tree canopy; support stormwater management through trailside plantings and gardens; help clean the air; reduce the urban heat-island effect while shading neighborhoods; and creating a sense of place—for people and the ecosystem. The completed Greenway will be a model of urban sustainability demonstrating the innovation and potential for America’s cities.

Nearly all MTA public transit systems will intersect with the Greenway, including the CityLink, LocalLink, Express BusLink, the Commuter Bus, the Light RailLink line, the Metro SubwayLink line and the MARC Train line, which provide multiple direct connections to every neighborhood in the city. For example, residents in south Baltimore will be able to use trails for increased access to transit and parks around the Middle Branch waterway for easier, safer access to downtown employment centers. The trail network will also provide a seamless off-road link between the Jones Falls Trail and the Herring Run Trail (at Lake Montebello), creating connections to two of the city's major universities, two of the city’s large parks and more than a dozen diverse neighborhoods together.

The Baltimore Greenway Trails Network will support economic development across the city—connecting employment centers to residential neighborhoods and linking trail development with community development. The trail network will bring new vitality to previously segregated areas and strengthen connections across the divided landscape. For example, a former industrial section of Baltimore’s east side is experiencing rapid population and business growth. This economic renaissance will be enhanced by transforming the area’s disused rail line into a rail-trail stretching south to the city’s popular Inner Harbor and north to residential neighborhoods—creating a host of new access points and active transportation options. When completed, the trail will weave together diverse neighborhoods that are currently cut off from each other and separated from the economic centers of southeast Baltimore. The barrier created by the unused railroad line will turn into a community connector linking residential neighborhoods to the north with the jobs and recreation opportunities in Highlandtown, Canton, Greektown and the Inner Harbor.

In multiple locations across the city, the public and private sector are working together to make sure the Greenway connects people to where they want to be. Unused industrial sites being converted into mixed-use residential, commercial and recreational uses are including connections to the Greenway and, in some cases, building sections of the Greenway as part of their construction because they know being connected to the trail will be good for business and good for Baltimore’s economy.

Connecting the Most Exciting Projects in Baltimore

The trail network links many of the city’s most transformative development projects and park plans in Baltimore. These exciting initiatives all play heavily into each other and have the potential to strengthen Baltimore by being connected to the Greenway. These exciting projects include:

How We’re Getting It Done

Thanks to dedicated advocacy work since the project’s conception in 2015, the Baltimore Greenway Trails Network has progressed significantly. This work, led by the Baltimore Greenway Trails Coalition, exists through extensive and continued outreach with various neighborhood and city stakeholders including: communities in trail corridor gaps, elected and business leaders, community advocates who have developed innovative funding and trail building plans and collaboration with public agencies to incorporate trail development plans into their capital projects and master plans.

Ways We’re Getting It Done

Working with Elected Leaders: RTC and coalition partners work with elected officials to help them understand the benefits of trails to communities through trail tours, corridor gap site visits and inviting them to community meetings.

Equitable Development Planning: RTC staff and partners continue to address longstanding equity issues in Baltimore by supporting local neighborhoods, organizations and non-profits' community-driven work along the trail network’s footprint. In partnership with the Mayor’s office, the coalition will engage with community leaders, advocates and residents to co-design the equitable trail development plan.

Leading Trail Programming: Coalition partners, particularly Baltimore City Department of Recreation and Parks, partner with organizations such as Black People Ride Bikes, Bikemore, Bluewater Baltimore, RTC and more to have a robust and accessible schedule of programming for residents and visitors on the trail network.

Capacity Building Grants: RTC continues to support Baltimore partners through a Trail Grants program. These grants helped strengthen partnerships with local organizations to continue advocacy and community engagement, which is critical to developing the trail network. Read more about the 2021 Baltimore grantees.

The Baltimore Trails Community Blog is an online resource that provides updates on the Baltimore Greenway Trails Network.

RTC's Baltimore staff use this space to talk about current initiatives and to highlight the work of our wonderful partners who are working toward a greener and more connected city, with more access to open space, trails and new ways to get around town.

In the greater Mondawmin neighborhood of Baltimore, a major intersection and divided highway make it nearly impossible for people to cross the street safely, essentially isolating them from Druid Hill Park and all it has to offer. On Sept. 28, 2016, the Baltimore Greenway Trails Network partnered with public artist Graham Coreil-Allen to create a demonstration crosswalk to show how safe street crossings can provide much-needed access for residents to Druid Hill Park. 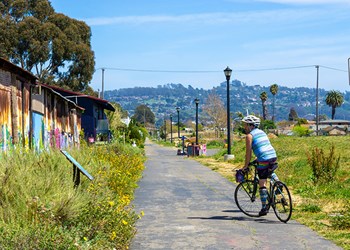 A Look Ahead for the Trails Movement in 2022 and Beyond

The challenges of the past couple years have shown us that our work remains more important than ever. As we look ahead, we see opportunity and...

A Look Ahead for the Trails Movement in 2022 and Beyond 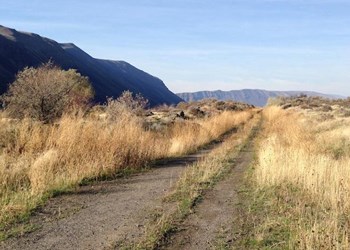 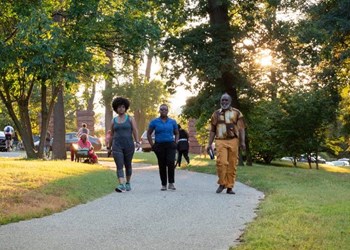 If you’ve been on Maryland’s Trails, then you know there’s much more to the state than just crabs, Old Bay and Baltimore Orioles baseball. The Free...