Imagine a sprawling interconnected system of multiuse trails that could take you city to city, state to state—across an entire region of the country. That’s the vision behind an exciting new initiative that began in 2019 called the New England Rail-Trail Network. Rails-to-Trails Conservancy is working with trail advocates and transportation leaders from six states—Connecticut, Maine, Massachusetts, New Hampshire, Rhode Island and Vermont—to advance a plan for connecting the region’s 1000 miles of open trail, and develop criteria for prioritizing future trail projects that can build momentum and mobilize support for the effort.

The goal of this spine network is to unite the New England region’s six states—Maine, Vermont, New Hampshire, Massachusetts, Rhode Island and Connecticut—by multipurpose trail. Borne on a mega vision of creating a simple, bold, memorable network with a minimum of on-road miles, the purpose of the network is not to serve as a comprehensive list of all open trails or trail projects—nor to have redundant segments or spurs—but to include only those corridors with the most likelihood of first success in uniting the states.

Only major “spine” trails have been included; however, other connectors can be added over time (and GIS sub layers will contain many other trails). These criteria will keep the focus squarely on completion of the priority corridors, with support being provided to adjoining systems and trails, since these corridors will be connecting to the larger interstate system. Over time, additional connecting trails will be strategically added to the project, with further work potentially including linkages to trail networks in New York and Canada.

Fortunately, 50% of the network is already open. The completed trails within the system have made the case for even more investment in trails via the many benefits that have been generated in the region, including job creation, community development and alternative transportation that has helped to decrease carbon emissions and address climate change.

The region has many positive attributes toward making this vision a reality, including: some 1000 miles of open trails (and growing), a variety of relevant, planned trail projects, supportive and well-staffed regional planning agencies, and—as with most successful trails—dedicated and knowledgeable volunteers.

New England is described as the only multistate region with “clear, consistent boundaries,” and therefore, it makes sense that it should be the first distinct region in America to articulate a multipurpose trail vision.

Progress and Next Step

Since the March 2019 meeting, RTC has convened three additional working-group meetings (and more than a dozen individual meetings) to assess corridor potential and define the vision. The next step to move the concept forward is securing funding for RTC to guide the implementation of the agreed upon workplan. 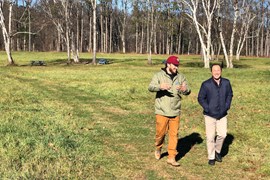 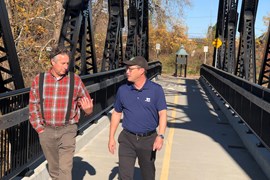