Promoting healthy, wealthy communities with the longest statewide multiuse trail system in the US

Health Impact: Every dollar invested will yield an estimated $3 in direct medical benefits.3

Economic Growth: The trail will attract visitors to smaller cities in the state and help develop and expand tourism. The project will also provide trail access for millions of New Yorkers that do not currently have it. Current trail spending for the Hudson Valley Greenway and Erie Canalway Trail is valued at $21 million per year and $253 million per year, and those numbers are expected to increase as more connections are created.4

New York’s developing 750-mile Empire State Trail is a massively transformative trail project that will connect hundreds of communities across 27 counties, providing both residents and visitors with expanded access to the outdoors, while supporting economic development in smaller communities and promoting healthy, active outdoor recreation.

In 2017, New York Gov. Andrew Cuomo announced a commitment to finish the trail, which to date is approximately 53 percent complete. With the Hudson Valley Greenway and Erie Canalway Trail serving as its backbones, the system will form a sideways T, eventually connecting Manhattan in New York City with Canada, and Albany with Buffalo. An investment of $200 million dollars was approved in the fiscal year 2017–2018 state budget—demonstrating the state’s commitment to completing the trail and supporting the health and economic wellness of communities along the route. According to the state’s Empire State Trail Plan, a $1investment in trails will yield $3 in medical benefits.3 What’s more, tourism generated from the trail will support the region’s economic growth; trail users of the two backbone trails already generate a whopping $274 million in annual economic impact, with that number expected to grow.4

Currently, a total of 400 miles of trail already exists in segments, and around 350 miles of additional trail will be constructed to join the pieces. The trail is being welcomed by small towns and local elected officials who recognize its ability to generate a significant economic impact. “The Empire State Trail now underway will be a groundbreaking project for New York, while the Capital Region’s rapidly growing network of trails is also more than recreation, packing a serious economic stimulus,” said New York Assembly member Pat Fahy.

When unveiling the project in January 2017, Gov. Cuomo also commented on the impact of the trail project. He stated, “The Empire State Trail, once completed, will be [one of] the nation’s largest … providing residents and visitors alike unprecedented access to New York’s outdoor treasures, driving tourism and economic activity to communities across the state and helping to protect our environmental resources for generations to come.”5

We have an unprecedented opportunity to work with federal policymakers to put Americans to work building the strategic connections that enable healthy...

When Trails Connect Everyone, Everywhere

Throughout this year, as we’ve continued to galvanize the trails movement in a virtual world, the movement itself has inspired us—in particular, the... 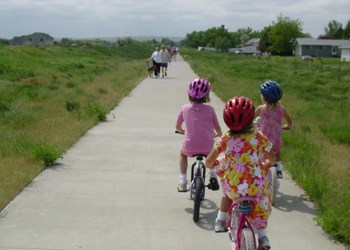 The USDOT announced its latest round of grant awards in the highly competitive BUILD (Better Utilizing Investments to Leverage Developments) grant...