Building Healthy Places and Healthy Neighborhoods for All

The developing 35-mile Baltimore Greenway Trails Network builds off a 1904 vision by the Olmsted Brothers to weave the innate beauties and unique geography of the city into pedestrian and bike-friendly infrastructure. When complete, the world-class trail network—with more than 25 miles already on the ground—will connect more than 75 of the city’s diverse and currently disconnected neighborhoods to anchor institutions such as universities, hospitals, museums, parks, schools and business districts.

Trails will strengthen many aspects of life for residents—including public health. In Baltimore, access to physical activity opportunities is low, while chronic disease rates are high—with obesity at 36 percent, high blood pressure at 85 percent and heart disease at 24 percent.1 This problem is compounded by the fact that while the city’s existing layout is abundant with open space and parks, they are not accessible to all residents, of which more than 30 percent do not have access to a car.2 An equitable trail network will provide residents with new safe walking and biking connections to these spaces, encouraging increased opportunities for physical activity and exercise.

In some sections of the city, loss of industry and lack of public transportation options have led to high unemployment, with Baltimore’s overall unemployment rate currently higher than the rate for Maryland. Residents have identified the ability to reach their jobs as the biggest barrier to staying employed, given the fragmented built environment and the fact that nearly 1 in 3 people don’t own automobiles.

Welcoming all the city’s neighborhoods into the planning process, the Baltimore Greenway Trails Network is a community-wide effort to address these critical concerns—and to provide new ways for people to move about the city and engage with each other in re-imagined public spaces. As Mayor Brandon Scott stated, “We have to invest in our parks and healthier lifestyles. […] Those are the kind of things we can use to unify neighborhoods.” 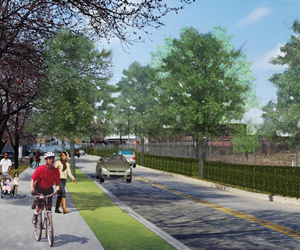 Transportation Impact: The network will provide connections to over 75 neighborhoods, increasing access to local activity centers, recreation opportunities and the downtown core.

Economic Impact: The Baltimore Greenway Trail Network can generate $48 million in job growth in the construction sector and an increase of up to $314 million in aggregate residential property valuation.4

Health Impact: The Centers for Disease Control and Prevention recommends combining active transportation + land use as an effective strategy to increase physical activity and lower rates of chronic disease. In a city with high rates of obesity, blood pressure and heart disease, building a trail network while increasing density will enable residents to be more physically active in a safe environment.

3 Estimated at 17 jobs per $1 million spent, according to a study commissioned by the American Association of State Highway and Transportation Officials (AASHTO) on American Recovery and Reinvestment Act (ARRA) job creation; jobs in terms of full-time equivalents. 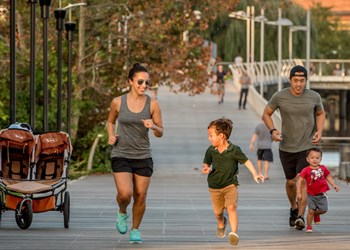 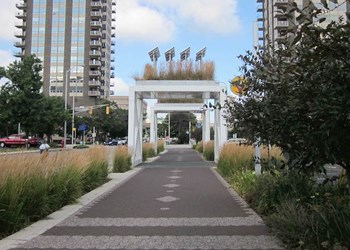 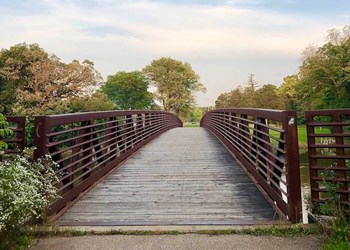