A Resource for Planners, Agencies and Advocates on Trails Along Active Railroad Corridors

Rails-with-trails are safe, common, and increasing in number. These are the standout findings of America's Rails-with-Trail Report, a defining new study on the development of multi-use trails alongside active freight, passenger and tourist rail lines.

Rails-with-trails are valuable assets in providing safe transportation networks for pedestrians and bicyclists. This report examines the characteristics of 88 existing rails-with-trails in 33 states, based on a survey of trail managers and the results of RTC’s ongoing study. It provides a collection of data, examples and practical tools to assist trail planners and advocates in increasing awareness of the rail-with-trail concept, and advancing local and state policies and practices that support rail-with-trail development.

Rails-to-Trails Conservancy (RTC) produced this report to provide updated information on national rail-with-trail trends. A continuation of RTC’s efforts to equip trail managers and advocates with resources to promote and develop rails-with-trails, this report enhances our rail-with-trail studies published in 1993, 1996 and 2000, and complements a report produced by the United States Department of Transportation (USDOT) in 2002, Rails-with-Trails: Lessons Learned. 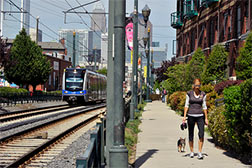 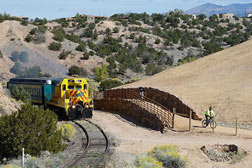 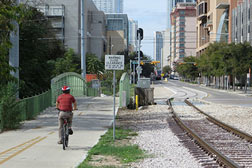 The increasing adoption of rails-with-trails has the potential to further reduce collisions by providing safe and intentional alternatives to trespassing on tracks. Americans increasingly demand that they be given balanced transportation options that include safe and healthy places to walk and ride. Taking full advantage of corridors to facilitate both rail and active transportation, as rails-with-trails do, is a smart and efficient step in that direction.