I'll admit it. I never thought I'd be moved by a video about Google Maps.

Enter our man Todd Scott of the Michigan Trails and Greenways Alliance. Scott is doing some very cool things in Detroit to make the motor city more bike-friendly, and to connect the people of this economically-struggling area with the power of two-wheels.

"It's not that we were always the motor city," Todd says in this video about Google's Map Maker Community. "The Dodge brothers made bikes before they made cars. Henry Ford built his first car out of bike parts."

In addition to his work running an Earn-a-Bike program in the Osborn neighborhood (funded by Rails-to-Trails Conservancy's Metropolitan Grants Program - a partnership with The Coca Cola Foundation), Scott has been busy using Google's open source platform to make a comprehensive map of bike friendly routes across the city. His simple purpose: make it easier for Detroit residents to choose a healthier, cheaper and more efficient way of getting around.

"It goes beyond map making," Todd says. "It's a way to take back your neighborhood." 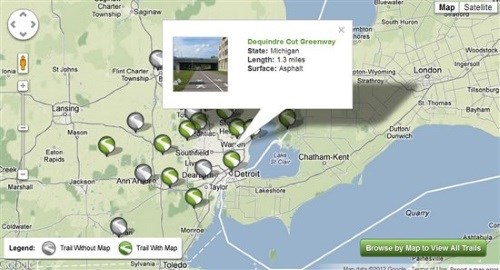 RTC has played a big role in getting bike and pedestrian routes online. When you visit Google Maps today, many of the biking and walking options you see are based on Geographical Information Systems (GIS) data provided by RTC from our recent trail mapping initiatives. This mapping work has enabled us to build the most comprehensive trail-finder website around, TrailLink.com, with photos, reviews and accurate maps of more than 20,000 miles of trails. It's free, by the way, so check it out.