It seems I never learn.

Last year around this time, I wrote about a gorgeous ride I was lucky enough to take on the George S. Mickelson Trail, running through the Black Hills of South Dakota.

In that piece, I recalled how each rail-trail we had ridden over the years was more glorious than any previous one we'd explored. A group of friends and rail-trail supporters has been taking this annual ride for a few years, and we've made some good choices. First, the Great Allegheny Passage. The next year, thePaul Bunyan Trail in Minnesota. Then came the twin wonders, the Trail of the Coeur d'Alenes and the Route of the Hiawatha in Idaho. The Mickelson, it seemed, trumped them all and became, as I put it then, "without a doubt the most amazing rail-trail anywhere on earth."

And now, we can add the Kettle Valley Rail-Trail in central British Columbia, Canada, to this little game of one-upmanship. 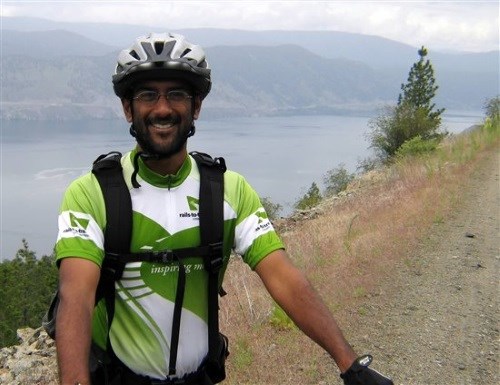 This rail-trail--part of the evolving Trans Canada Trail--is unlike anything I've experienced here in the United States. The first day, through Myra Canyon outside of Kelowna, B.C., felt similar to our route two years ago, winding our way down the Route of the Hiawatha, feeling like we were in a land untouched by humanity, but for the trestles. These sheer wonders of engineering ingenuity were actually replicas reconstructed by the Canadian government following the terrible Okanagan Mountain Park Fire that ravaged the region in 2003.

During the next several days we rode through on-again, off-again rain showers as we made our way past the various unique views along the trail. We rode through Rock Oven Park, where we saw numerous rock ovens that were built and used by the railroad workers a century ago for fresh bread as they constructed the rail line deep in the Okanagan Valley. We came across views of Christina Lake that almost seemed to physically slow our tires as we ground to a halt in awe. We rode through vineyards, past strongly aromatic groves of sage, along corridors with the rails still in the ground, and over trestle after trestle, through tunnel after tunnel. The connection to the region's rail history was not to be forgotten.

At one point along the ride, as we gazed out at yet another phenomenal view of mountains, lakes and conifers as far as the eye could see, I commented to my riding companions that it reminded me of New Zealand. "When were you there?" asked another rider. I confessed that I'd never been, but that the Lord of the Rings trilogy made me feel as if I understood the similarity in the landscapes. Moments later, another rider commented that the views here exceeded anything she had seen in her years of international riding, including such destinations as Nepal and Switzerland.

As is often the case on such a ride, we could not help but compare the various trails we've ridden over the years. As such, our mantra for this year's trip, coined by one rider referencing a comment from my post from last year, was, "How big can you write the word 'WOW?!'" Thereafter, each new view, each trestle more formidable than the last, each mile pedaled seemed to elicit the same jaw-dropping "wow" reaction.

So, despite previous claims of having ridden what must be the most gorgeous rail-trail anywhere, the Kettle Valley Rail-Trail proves that I need to keep biting my tongue and just take in the views. After all, somewhere, somehow, yet another rail-trail might possibly rival even this one!

And I'm determined to find it and make its acquaintance.

Best Of Trails of the World Wild and Wonderful