For local transportation planners and rail-trail builders, it is a familiar story: County announces trail project, sections of the community oppose project as wasteful use of money, rail-trail opens to wild acclaim, rail-trail is incredibly popular and well-used, opposition vanishes.

It is a pattern now repeating itself in Union County, Pa.  When the Lewisburg Area Recreation Authority (LARA) began building the Buffalo Valley Rail Trail back in 2009, some residents described the use of state and federal grants to purchase the corridor and construct the trail as "state-sponsored robbery."

Still, officials in Union County, Lewisburg and East Buffalo knew that such a transportation option and recreational amenity for this growing area, home to Bucknell University, was a key piece of infrastructure the region needed if it was to continue to grow sustainably and attract new residents and businesses. And from the moment the trail opened in November of last year, connecting Lewisburg, Vicksburg and Mifflinburg, it became clear they had done a terrific thing for the county.

The Daily Item news site out of nearby Sunbury is reporting that an automated counting device set up by Bucknell University students tallied an average of 400 people using the nine-mile rail-trail each day, numbers that indicate that locals are using the trail for practical trips as well as for recreation.

That user-popularity is also building a large volunteer community around the trail. For the first trail clean-up event in April, 82 people volunteered to help out--about nine people per mile. Local 'ownership' of the rail-trail is a strong sign of its value to residents. 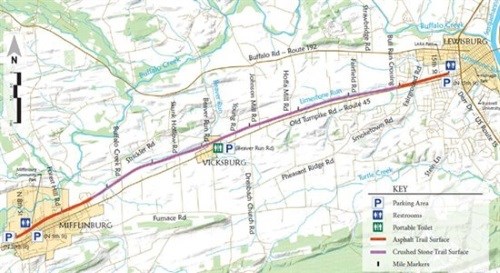 When the rail-trail was still on the drawing board, Rails-to-Trails Conservancy's (RTC) Northeast Regional Office provided LARA with trail-user projections and qualitative analysis of how it would benefit the community, ensuring local officials maintained their support of the project.

"Our studies indicate the average economic impact of a rail-trail in Pennsylvania, just to the local community, ranges from a low of $1 million per year to a high of more than $4 million," says Pat Tomes, RTC's program manager in the Northeast. "These are compelling figures. This economic impact is generated by new and existing businesses that serve the needs of trail users, not to mention the proven impact local trails have on home prices and an area's appeal to potential new residents. Having studied what happens to communities that build trail networks, the evidence is clear that they represent a measureable investment in the economic vitality of a community."

Congratulations, Union County, on your new rail-trail. As we have seen with new rail-trail projects across the country, no doubt the number of daily trail-users will continue to grow, year after year.