"It went from a really crazy idea to a world-class community asset."

Everyone has heard about Detroit's troubles: the bankruptcy, the population decline, abandoned buildings and urban decay. What's not often heard is the story of the strength, resilience and pride of Detroiters. Underneath the rubble of bad press, hope grows as a revitalized riverfront and developing trail system are changing the way people think about the Motor City. A signature component of this movement, the Dequindre Cut Greenway, is itself a Cinderella story.

"Detroit is not some dying city that nobody wants to be in," says Eric Oberg, trail development manager in the Midwest Regional Office of Rails-to-Trails Conservancy (RTC). "That's not the narrative on the ground there. We can't say that everything is rainbows and unicorns; there are problems, but people are facing those problems, not dwelling on them."

The Dequindre Cut—once a haven for derelicts and drug activity and now a well-loved showpiece with a uniquely Detroit flavor—is the epitome of this sentiment. The "Cut" is a wide trench in downtown Detroit, just over a mile long, that was sunk 25 feet below street level in the 1920s by the Grand Trunk Railroad to avoid foot and vehicle traffic, which continued overhead unimpeded on more than a dozen bridges. Passenger and freight service was discontinued on the line in the early-to-mid 1980s and the corridor sat vacant. Weeds and underbrush took over, and trash littered the way.

"The immediate universal reaction to the idea of building a trail there was, 'You are out of your freaking mind,'" recalls Tom Woiwode, director of the GreenWays Initiative of the Community Foundation of Southeast Michigan.

Yet, anchored by two of the city's cultural and historical touchstones, the corridor held promise. At its northern end was Eastern Market, a commercial district centered around a six-block farmers market in operation since 1891. At the other end was the Detroit River, a key part of the Great Lakes system and an international border (counterintuitively, you have to go south from Detroit to enter Canada).

This was not the first time Woiwode had faced an uphill battle. In 1999, he had the vision of using greenways to connect 250 municipalities within the seven-county area that included and surrounded Detroit. The program he developed, the GreenWays Initiative, was the first of its kind in the country. The effort was launched in 2001 with the Community Foundation of Southeast Michigan setting out to raise $25 million from the private sector to leverage $50 million in public dollars for the design, planning, and funding of greenways in the region. 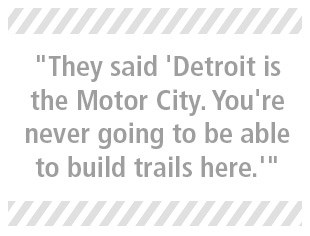 RTC supported the effort, compiling a report on the abandoned rail corridors in the greater Detroit region that could potentially be converted into rail-trails. At first, not everyone was on board. "There was a sizeable push-back by a number of foundations," says Woiwode. "They said 'Detroit is the Motor City. You're never going to be able to build trails here.'"

But enthusiasm for the idea grew and eventually the organization surpassed even its most ambitious goals. One of the projects that was partially funded by the GreenWays Initiative was the Dequindre Cut. The trail's pavement was laid in the 2008 and, although it wasn't officially opened yet, Woiwode recalls the high sense of anticipation. "I would be standing on a bridge looking over the construction site and would see people crawling over the barricades because they were so excited by how cool this thing was." When the greenway opened the following summer, "It went from a really crazy idea to a world-class community asset."

To help allay fears, the Detroit RiverFront Conservancy, stewards of the trail, installed a series of emergency call boxes and security cameras along the route, and created a uniformed security force to patrol the Cut and adjacent Detroit RiverWalk by foot and bike. Today, Marc Pasco, communications director for the organization says, "Crime along the riverfront and the Dequindre Cut is virtually nonexistent."

Not only was the new trail a safe and useful link through the city, it offered something not found elsewhere: The graffiti-covered walls along the Cut were left alone by the trail's proponents.

"The artwork is a local stamp that lets Detroiters know that this is us, this is who we are, this is our trail," says Oberg. "The graffiti along the trail makes a big impact that people get. The artwork is prominent, not subtle, and makes an impression."

Prior to the greenway's opening, the revitalization of city's riverfront—which the Dequindre Cut would eventually link to—paved the way for change. "Ten years ago, the Detroit riverfront wasn't a very attractive place," says Pasco. "There were abandoned buildings, weeded lots, cement silos, and it offered very little public access to the river."

Momentum took off when the Detroit RiverFront Conservancy formed in 2003. Through a public/private partnership with the City of Detroit, General Motors, the Kresge Foundation, and others, the area has been reclaimed for the public good, generating thousands of jobs and an annual spending along the riverfront of $43.7 million, according to an economic impact study published just this year.

The RiverWalk, at the southern end of the Dequindre Cut, connects to Milliken State Park, numerous plazas and pocket parks, and the Renaissance Center, a cluster of seven skyscrapers serving as General Motors' world headquarters, as well as a massive shopping, dining, lodging, and entertainment complex.

Soon, both the RiverWalk and the Dequindre Cut Greenway will be expanding. "When we first started talking about the Dequindre Cut, a lot of people were skeptical," says Todd Scott, the Detroit greenways coordinator for Michigan Trails and Greenways Alliance. "They thought no one would use it, but now people keep asking, 'When are you going to make it longer?'"

The answer is fall 2014. A northern extension of the greenway is currently underway that will add just shy of a mile of trail along the former railroad corridor up to Mack Avenue.

"I've lived in Southeast Michigan my entire life," says Pasco. "I've seen it through not so great times, but things are starting to transform. There's an electricity in the air now that you can almost feel, a sense of vibrancy and urgency in Detroit that's been missing for a long time."

Oberg, who met with the city's trail advocates and planners this summer felt it, too. "The take-away from our visit was that Detroit is not going to stay down," he says. "There's a lot of positive energy and good things going on there. It's a wonderful American city."

Brought to You By:

Thanks to Club Ride Apparel for sponsoring November's Trail of the Month.

Grade: The trail itself is relatively flat, but runs through a corridor 25 feet below street level.

Getting there: Detroit Metro Airport (1 Detroit Metropolitan Airport Tram) sits about 20 miles southwest of the trail.

Access and parking: Free parking is available at Rivard Plaza, one block west of William G. Milliken State Park. From the lot, take the Detroit RiverWalk east along Atwater Street to the start of the Dequindre Cut Greenway.

Rentals: Bicycle rentals—cruisers, hybrids, road bikes, and tandems—are available along the RiverWalk from Wheelhouse Detroit (1340 E. Atwater Street; info@wheelhousedetroit.com; 313-656-2453). Helmets and locks are included, and accessories such as baby seats and trailers are also available. A variety of guided tours are available from the shop as well.