As we lead up to Valentine’s Day in our American Heart Month series, RTC is pleased to share this story by guest contributor Marcia Laus of how—after losing a son to epilepsy and battling severe health problems—she (55) and her husband Rick (58) are rebuilding their lives and repairing their hearts on America’s trails.

The 1990s and early 2000s were very difficult for our family. Our beautiful son Kevin developed severe epilepsy—causing a significant cognitive disability. My husband Rick quit his full-time job to take care of Kev. I would get home from my job in the evening, and Rick, a musician, would head out the door to teach or perform percussion.

Kev was just a baby when Rick had undergone triple bypass surgery—broken heart number 1—and the next several years after Kev was diagnosed, we’d find ourselves again making frequent trips to the hospital for Kev. He improved for a time when he was 10; however, in October 2005, Kev lost his battle with epilepsy, and we lost our joy. Broken heart number 2.  For a long time, our evenings after work consisted of me sitting in front of the television and Rick staring at the computer for hours. Then, in 2008, we had another scare when Rick had a mild heart attack and had to have stents placed in his veins via a heart catheterization. 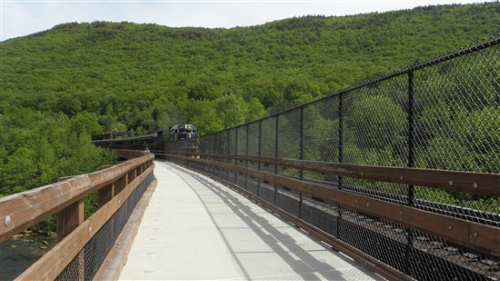 In 2012, we had an epiphany that we better get our act together and get healthier. We changed our eating habits and upped our exercise significantly. We walked on the Panhandle Trail, which happens to run through our neighborhood.

After many walks on the same portion of the trail, we decided to walk the whole length of the trail in two- or three-mile segments. Each day, we would drive a little further along the trail and start out on a new segment that we hadn’t walked before. As the weather got better, we also started biking. We would go about two miles out and two miles back at that point; we were so proud of ourselves! We started to increase that distance gradually, and in April, we made a deal that we would ride the whole 28 miles by Labor Day.

And we did even better than that.

It’s  not often that you get a 90-degree Memorial Day near Pittsburgh, but that year we did, and we spent it on the trail. It took us 3.5 hours with several breaks—but we did it!!!  Oh—and we walked the whole trail that year, as well.

Rick has lost 50 pounds, and I’ve lost 20. Rick surprised me with a new bike for my birthday. (He got one too, even though it wasn’t his birthday…!) Besides our almost daily rides on the local trails now, we plan vacations around where we can find new ones.

Our rides have taken us to so many places: from Pittsburgh to the Paw Paw Tunnel on the Great Allegheny Passage (GAP) and C & O Canal trails in Pennsylvania and Maryland; the entire lengths of the Montour Trail in Allegheny County (sleeping overnight in the trailside shelter) and the Butler Freeport Trail in Armstrong and Butler counties in Pennsylvania; and the D & L Trail – Delaware Canal Towpath in Eastern Pennsylvania.

We’ve ridden in Erie and Forest counties in Pennsylvania. We participated in the Cook Forest River Ride for Multiple Sclerosis. And, one of our favorites:  the Ohio and Erie Canal Towpath.

This year, we are planning to do the entire length (round trip) of the Greenbrier River Trail in West Virginia!

Our physical hearts and our emotional hearts are repairing with the time we spend together on the trails. I think you’ll find us on some rail-trail every summer for many years to come.

Health and Active Living Why Use Trails?