Twenty trail projects in California got good news in August when they were funded in the first round of Statewide and Rural projects under California’s new Active Transportation Program (ATP). The funded trails reflect a range of urban, suburban and rural projects and include some rail-trails, such as the Humboldt Bay Arcata Rail-with-Trail and the East Bay Greenway (Oakland). The Napa Valley Vine Trail, which RTC has enthusiastically supported, also landed in the winner’s circle, securing $3.6 million for the six-mile Oak Knoll District segment, connecting the City of Napa’s existing “Crosstown Commuter Trail” at Redwood Road to the existing Vine Trail section in Yountville.

Competition was stiff for ATP funding, reflecting enormous pent-up demand for bicycle, pedestrian and trail improvements across all regions of California. In total, there were more than 700 applications seeking more than $1 billion in funding, with only about $360 million available for programming in this round. Of the 700-plus applications, 132 represented trail and pathway projects. The Statewide results just announced represent 60 percent of the $360 million pot; the remaining 40 percent is the Regional share, to be awarded by metropolitan planning organizations (MPOs) in November 2014. 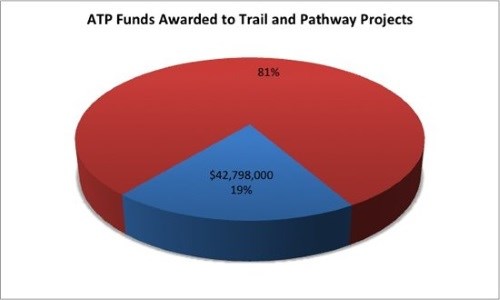 The ATP recognizes the importance of active transportation as an essential part of the statewide strategy to reduce greenhouse gas emissions and encourage sustainable, healthy communities. Another important goal of the program is to ensure that disadvantaged communities share in the benefits of active-transportation investment, and this year, applications exceeded expectations.

This substantial investment in trails and other active transportation will be a big step forward in creating the active, healthy and sustainable communities that we all want to live in.