"The Allegheny River Trail is one great vista after another."

Unparalleled natural beauty? Check. Welcoming towns with friendly people? Check. Unique historical sites and a smooth, easy riding surface? Check, check. The 32-mile Allegheny River Trail in northwestern Pennsylvania seemingly has it all for a perfect getaway. And it's on the cusp of being even better; peak fall colors are expected to arrive in early to mid-October; the trail, lined with oaks, maples, elms and other tree varieties will be spectacular. 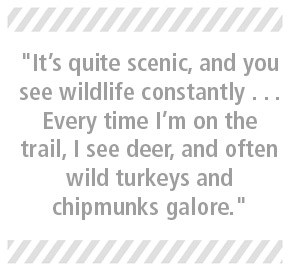 "It's quite scenic, and you see wildlife constantly," adds Kim Harris, project manager for the Oil Region Alliance of Business, Industry and Tourism. "Every time I'm on the trail, I see deer, and often wild turkeys and chipmunks galore. Many eagles are also spotted there because of the trail's location by the river."

Though the trail would be a worthwhile visit in and of itself, it's directly connected to or near several others in the region. It serves as a key component of the growing Erie-to-Pittsburgh Trail, a 270-mile network comprised primarily of rail-trails, which is currently 60 percent complete. Earlier this month, locals got to experience the trail system firsthand on a 60-mile memorial bike ride to honor the trail's guiding soul, the late Jim Holden, a man of warmth, drive and—most of all—vision.

"We had a wonderful event with about 50 participants," says Harris, who organized the ride and is secretary of the Erie-to-Pittsburgh Trail Alliance. "It rained, but it didn't dampen any spirits."

Twenty-five years ago, such a trail system would have been a far-reaching and unlikely dream. Holden, a university professor and farmer, seeing that there were limited areas for safe cycling in his community, co-founded a nonprofit group called the Allegheny Valley Trails Association (AVTA) in 1990. With fellow university professor David Howes, he worked to acquire local unused rail corridors for conversion to rail-trails, and the Allegheny River Trail was their first success. The Sandy Creek Trail and Clarion Highlands Trail later followed, offering dozens of scenic miles of trail dotted with trestles, tunnels and other railroad relics across Clarion and Venango counties.

Right off the bat, as one travels down the Allegheny River Trail, you know you're in for a treat. Just five miles from its starting point in Franklin is the Belmar Bridge, its crisscrossing rusty-red beams a striking contrast to the tree-covered hillsides and the dark blue waters of the Allegheny, which it spans. The bridge, dating back to 1907, is part of the 12-mile Sandy Creek Trail, running above the Allegheny River Trail and unfurling east and west from the river. The two trails are linked by a stairwell, but a switchback is planned to make the connection more bike and wheelchair friendly; construction is likely to be completed next year.

For much of the journey, the river—designated a National Wild and Scenic River—is by your side. "It's very popular with local canoers and kayakers," says Bill Weller, AVTA president. "It's not unusual to see 50 to 100 canoes and kayaks on the river in the summertime. It's heavily used for water recreation."

Two other highlights of the trail are its tunnels, both with dog-leg bends, so as one peers down their inky blackness, there's no metaphorical light at the end of the tunnel. There are reflectors down the center and off to the sides to guide the way, but riders will need headlights for the venture. However, Harris notes that there is a friendly, retired gentleman who lives between the two tunnels who greets passersby, providing drinking water and headlamps to the unprepared.

Though bridges and tunnels make for a fun adventure, the Allegheny River Trail also offers something unusual for a rail-trail: petroglyphs. At about the eight-mile mark, right on the riverbank, sits Indian God Rock, a large sandstone boulder on which one can still see carvings of animals and people believed to have been created by Native Americans around A.D. 1200.

The main spine of the trail ends in Emlenton, but after a three-mile gap, a short, paved segment of trail picks up again in Foxburg and continues 2.6 miles south to end near the community of Parker. Unfortunately, there's currently no easy way to navigate the gap by bicycle, but AVTA has their sights on closing the gap and is negotiating with the landowners there.

"We're working on the right-of-way between Emlenton and Foxburg," says Weller. "Right now, it's an overgrown railroad grade."

Residents of Foxburg are eager for the connection. The charming riverfront community offers restaurants, lodging, a winery and other businesses that could see a noticeable boost from bike tourists. The town also has the distinction of having the oldest continuous golf course in the United States; it was built in 1887.

"There has been increased excitement within the last two years," says Harris. "You can just feel it. People are really talking about the trail."

Sexton adds, "Venango County is very rural. To have this type of trail system there is impressive. If you want to move somewhere with access to a really great rural trail system, this is the place to go. There's nowhere else like it."

The future looks bright for this already popular and well-loved amenity. With the closing of its gap and the build-out of the Erie-to-Pittsburgh Trail network, it promises to only get better.

"Thank goodness for people with dreams," says Weller of his friend and mentor, Jim Holden.

Surface type: Asphalt; however, there is one very small section of less than a mile that is on a shared, unpaved road in Sunny Slope, about 13 miles south of Franklin.

Difficulty: Easy; the trail is paved and fairly level with a slight downward grade as you go south from Franklin.

Access and parking: There are six trailheads in the communities along the Allegheny River Trail (from north to south): Franklin, Belmar, Brandon, Rockland Station, Emlenton and Foxburg. Please visit the Allegheny Valley Trails Association for the specific facilities available at each trailhead.