From the Massachusetts state line to Lebanon, rail-trail development is booming in New Hampshire. The Granite State Rail Trail, when complete, will run 115 miles from the Connecticut River to Methuen. Currently, 62 miles of the trail have been completed, with construction projects in Londonderry and planning underway for the Merrimack River Greenway in Concord. In southern New Hampshire, the approximately eight miles of the combined Derry Rail Trail and Windham Rail Trail represent the longest paved section of the Granite State Rail Trail—and the longest section of paved abandoned rail corridor in New Hampshire! 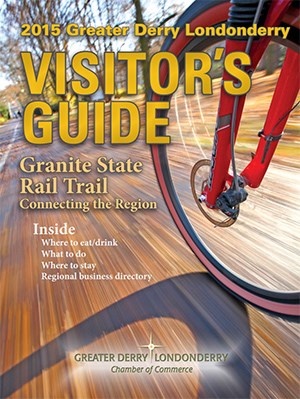 The relationship between trails and economic development has long been acknowledged by communities across the United States. Fredrick Law Olmsted, the renowned landscape architect, conducted the first economic impact analysis of urban parks on Central Park, finding a strong positive relationship between this new amenity and property values. And over the past several decades, RTC has uncovered evidence of the direct economic impact that rail-trails have had on many communities—some in the tens of millions of dollars annually.

The Derry-Windham Rail Trail has been used as a multi-use pathway since the 1980s, and efforts to begin paving the trail began in the mid-2000s. Now, trail tourism is on the rise as new businesses, which cater to walkers and bikers of all ages, experience a surge of business.

Recognizing the benefits that the trail provides for its adjacent communities, the Derry Rail Trail Alliance worked with the Greater Derry Londonderry Chamber of Commerce to get the rail-trail and other local trails in Derry, Londonderry and Windham featured in the chamber’s 2015 Visitors Guide. (The guide will be placed in rest stops along Interstate 93, as well as hotels and restaurants around the region, to help promote local businesses and bring more people to the trail.)

To learn how the trails have stimulated the development of new business, check out the cover story (p. 10). The Grind Rail Trail Café, a community-focused, bicycle-themed specialty coffee bar in historic downtown Derry, opened in 2014 as a result of two trail users who couldn’t find a suitable coffee shop after their trail ride! The Windham Junction Country Gift Shop and Kitchen has also benefited from the rail-trail. Although not visible from the trail, word of mouth has sent trail users seeking some treats and respite from their journey to the shop.

An additional quarter-mile of trail will be paved in Windham, which will connect to the in-progress trail in Salem, and Londonderry is working on completing an additional section of trail to add to the mile that was completed in 2014.

Business will just keep getting better for The Grind, Windham Junction Country Gift Shop and Kitchen, and other local shops and restaurants as the nearby trails continue to expand.