This blog was first published on Aug. 11, 2015, and has been updated for our 2016 Share the Trail Campaign. Be the best you can be on America's pathways, and pledge to Share the Trail today!

I learned to ride bikes at Champoeg State Park, near my family’s house, when I was growing up. Four years old and foolhardy, I thought I owned the trail. To try and keep up with my older brothers (I hate being left behind!), I had to go fast, but there were all these people in the way. So my dad taught me how to pass and what to say.

“Passing on your left, please!” he taught me to say in a singsong voice. 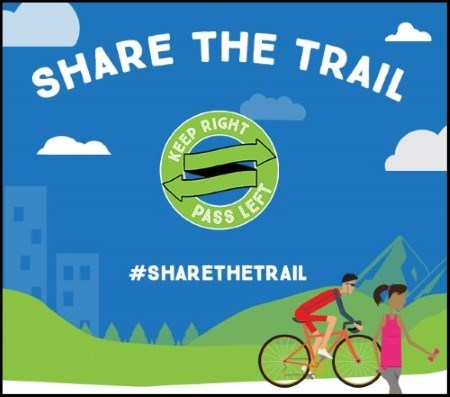 I said it through training wheels. I said it through high school. Amazingly, I was in college before I realized I didn’t have to say it exactly that way! I could say, “On your left,” or simply “left,” or ring a bell.

However you say it, passing on the left is important—because trails have all sorts of traffic, making predictability and courtesy critical to ensure great experiences for all.

“Bikers, runners, walkers with dogs; we need to be aware,” says Jim Stenulson, president of the River City Running Club in La Crosse, Wisconsin. “We know there are others out there, and we have to make room.”

Stenulson frequents the Elroy-Sparta State Trail while training for the Norwalk-based Rails to Trails Marathon each year, and he’s witnessed first-hand how critical this piece of trail etiquette can be in certain situations.

The trail is usually open for use during training runs and races, and runners typically travel on the right unless there’s a big group. Running or biking on the right is important, he says, so that people know where other trail users will be when they go to pass them. “We listen for bikers to warn us and then move to the right,” says Stenulson. “Most bikers are pretty good at calling out or ringing a bell.”

According to Stenulson, hills have the potential to be hotspots, and trail users should use extra caution. “On hills with sharp turns, some people don’t think to slow down—they’re in the zone or something—and if you’re on the wrong side [in this case, on your left and in their right of way], by the time they do slow down, it may be too late.”

While everyone has the responsibility to use safe speeds, being in the correct lane is crucial to avoiding collisions, particularly in those tricky situations, as is slowing down when passing others.

“One time I was coming up behind someone with headphones and said ‘Excuse me,’ and they didn’t even know I was there,” says Stenulson. “When you’re out there … lost in your own thoughts and not expecting someone to come from behind, it can be quite startling [to be passed without warning]. That’s where calling out and keeping far to the left comes in [when passing other trail users].”

Recently, I asked my dad about the phrase I learned growing up and why he taught us to say that particular way. Of course, I understood the “On your left” part—but why the “please?”

He said he learned it on a bike tour and brought it home to us so we could safely share the road, or trail—and practice being pleasant.

“I used it with you kids because it kept you from scaring people, kept you from hurting them and gave you a chance to be friendly,” he said. “Plus—it didn’t hurt you, did it?”

And he’s right. It never hurts to be polite.